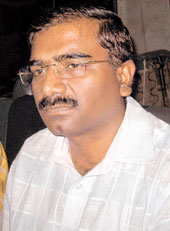 Earlier in August, the IAS officer was also convicted and awarded 3 years in jail in connection with a scam worth Rs 55 lakh.

According to Hemanta Kumar Swain, Public Prosecutor: “The court today found Vinod Kumar and six others guilty and sentenced them to 3 years in jail in connection with a scam worth Rs 1.02 crore on the pretext of providing flats to 27 people. The court, however, acquitted Chitta Ranjan Mallik, the then accounts officer of OHRDC.”

The court, in July, had convicted senior IAS officer and five other employees of OHRDC in connection with the fraud. Of the six, only Sanjay Mohanty, Assistant Manager of the Corporation, had appeared in the court on that day.

The Vigilance Directorate had registered a case against Kumar and the five employees of the Corporation for financial irregularities to the tune of Rs 55 lakh in 2000.

During his tenure at the Corporation in 2000-01, Kumar had allegedly unscrupulously granted loans to builders and contractors without obtaining adequate collateral security and proper scrutiny. Besides, no follow-up action was allegedly taken by the Corporation to recover the loans.