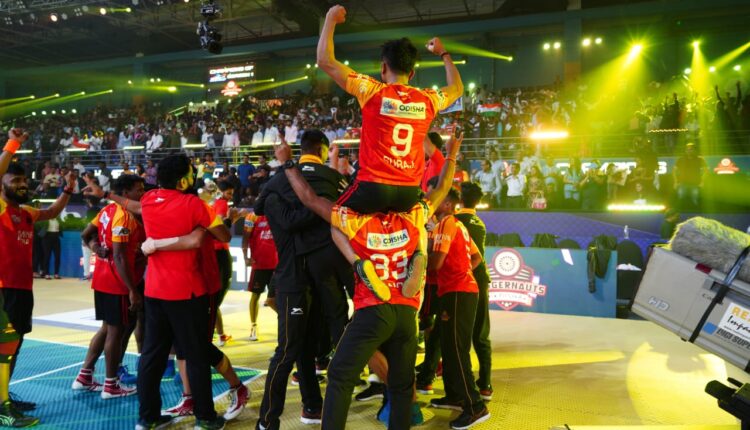 After Telugu Yoddhas, managed to add 21 points in the third turn to take 41-27 lead, Sachin Bhargo provided two crucial points for his side and also kept Odisha Juggernauts at bay for 2.44 minutes. When he was dismissed, Telugu Yoddhas were in lead at 45-43 with just 1.24 minutes left in the match.

However, Lande, who tested the defence of Telugu Yoddhas with his stay of 3.03 minutes in the third turn, had different plans for Odisha Juggernauts. With just 14 seconds remaining in the game, he captured Avdhut Patil with a superb sky dive that not only added three winning points for Odisha Juggernauts but also helped them win the title.

Lande scored nine points in attack for the winning side while Rohan Shingade secured 11 points for Telugu Yoddhas. 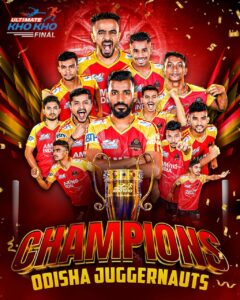 Odisha Juggernauts chose to defend as Vishal showcased brilliant skills to put a challenge for the league’s best attacking side, Telugu Yoddhas. Coming into the first batch, he defended for four minutes and 23 seconds to score eight bonus points for Odisha Juggernauts and then skipper Dipesh More and Dilip Khandavi added two more points with their unbeaten stay of 2.37 minutes.

With a remarkable defensive display, Odisha Juggernauts held Telugu Yoddhas to 10-10 in the first turn.

Telugu Yoddhas, the first team to reach 100 defensive points in Ultimate Kho Kho, responded well after switching positions as they not only restricted Odisha Juggernauts to 13 points but also added eight points with the help of Adarsh Mohite’s 4.12-minute defence. However, Odisha Juggernaut kept themselves ahead with a narrow 23-20 lead at the end of the nail-biting first innings.

Ultimate Kho Kho is promoted by Amit Burman in collaboration with the Kho Kho Federation of India.