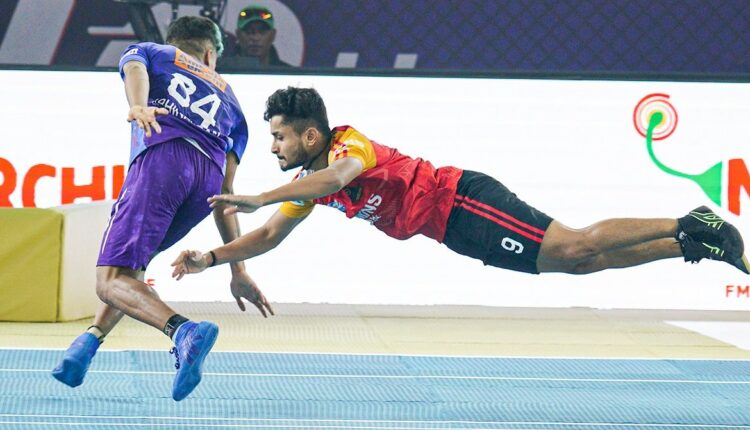 Pune: Odisha Juggernauts today registered a comprehensive 57-43 victory against Gujarat Giants to storm into the final while Telugu Yoddhas knocked out Chennai Quick Guns by 61-43 in the inaugural edition of Ultimate Kho Kho at the Shree Shiv Chhatrapati Sports Complex in Pune of Maharashtra.

Despite a 14-point loss, Gujarat Giants still have a chance to seal their berth in the final as they will play the winner of the eliminator match, Telugu Yoddhas in the qualifier 2 on Saturday.

Odisha Juggernauts and the winner of qualifier 2 will fight for the title in the final, scheduled on Sunday.

In an intense battle between Top-2 teams of the league, Odisha Juggernauts began the game aggressively by claiming 23 points in the first turn. They played equally well when they switched to defence and allowed only 18 points to Gujarat Giants.

Milind Chavarekar and Avinash Desai remained unbeaten for 2.38 minutes to secure two bonus points as Odisha Juggernauts continued to lead with 27-18 at the end of first innings.

Odisha Juggernauts added 24 more points to their tally in the third turn, thanks to two sky-dive dismissals each from Lande and Aditya Kudale, earning 12 points.

Already in the lead, Odisha Juggernauts held their nerves in the crucial final seven minutes. Khandavi kept the Gujarat Giants at bay during his sensational defence of 3.48 minutes, adding six bonus points for Odisha Juggernauts before they clinched the match comfortably and marched into the final.

Leading from the front, Waikar exhibited a skillful defence of 6.43 minutes, including 3.44 minutes of first innings. Adarsh Mohit, on the other hand, supported him well by scoring 16 points in the attack as he dismissed six players, four of them on dives.

Amit Patil, with defence of 3.59 minutes, and Madan (8 points) performed well for Chennai Quick Guns but couldn’t save their side from an 18-point defeat.

Ultimate Kho Kho is promoted by Amit Burman in collaboration with the Kho Kho Federation of India.

With a massive prize pool of Rs 2 crore up for grabs, the title winners will get Rs 1 crore along with the coveted trophy whereas second and third-placed teams will take home Rs 50 lakh and Rs 30 lakh respectively.