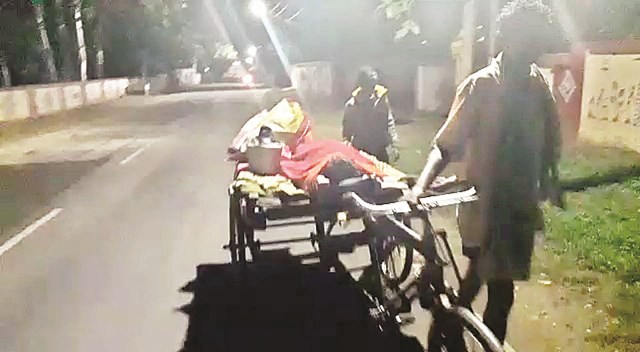 Sundergarh: The Mahaprayan scheme launched by the State government drew sharp criticism after a poor widow woman was forced to carry his son’s body on a trolley rickshaw from hospital for last rites here in the district.

The incident had occurred on July 29, but came to fore on Sunday following a video clip went viral on social media.

Body carried on trolley rickshaw over COVID-19 scare in Odisha

According to reports, the woman identified as Mira Rohidas was forced to carry her son Tikeswar Rohidas’ body on a trolley rickshaw in the wee hours on July 30 from Sundergarh district headquarters hospital to her residence at Lohradhipa under Sundergarh municipal area after she was denied ambulance service under Mahaprayan scheme.

Source said that Tikeswar (25) was admitted to the hospital on July 23 following he complained of illness. While undergoing treatment, he died at around 2.00 am on July 29 night. Mira requested the ambulance driver, who demanded Rs 300 as user fee for transportation of the body in vehicle.

However, expressing her helplessness to pay amount to the ambulance driver, the poor mother carried the body on a trolley rickshaw without complaining to the hospital authorities.

Notably, the State government had launched the Mahaprayan scheme after an incident from Kalahandi district where Dana Majhi, a tribal man, walked for 12 km carrying his wife’s body on his shoulder, hit headlines in national and international media in 2016.

The scheme facilitates transportation of bodies from hospital to the village of the deceased.