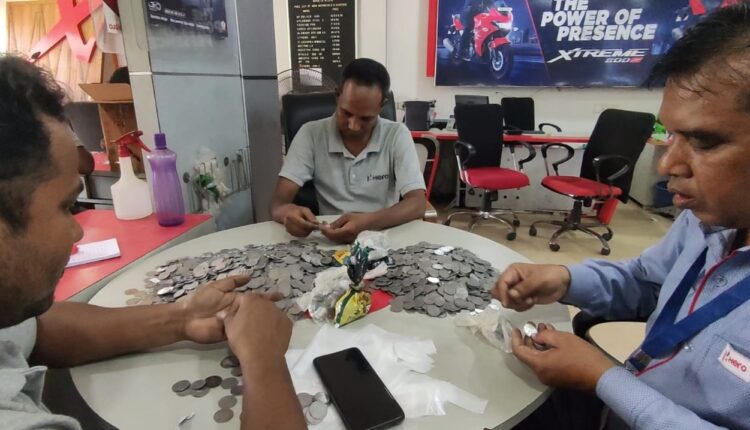 Baripada: Every penny counts, and this holds true for Akash Mohapatra from Chandua village under Kuliana block of Mayurbhanj district. Mohapatra has bought a two-wheeler recently by paying the loose change that he saved for past 18 years.

He bought a Scooty vehicle from a two-wheeler showroom at Baripada and paid four sacks of loose change amounting to Rs 62,000.

He also migrated outside the state to work as a labouer. However, he returned to the village after few months and started a beetle shop.

As customers visiting Mohapatra’s shop paid him with loose change, it became quite easy for him to save more coins. Subsequently, he amassed four sacks of loose change.

Accompanied by a relative, Mohapatra went to the Aditya Motors showroom located in Baripada to buy a two-wheeler a day ago.

Initially, the showroom owner refused to sell a vehicle in return of loose change. However, the owner relented after hearing Mohapatra’s struggle.

A senior official of the vehicle manufacturer also directed the showroom not to create any issue for Mohapatra to buy a vehicle after coming to know the story of Mohapatra.

A total of 12 employees of the showroom took around five hours to count the loose change given by Mohapatra.

Youth dies by suicide in Odisha after beloved refuses to elope