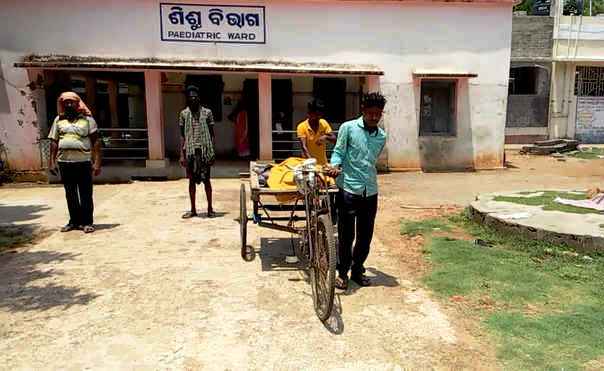 Odisha government today ordered probe into the incident that happened at Nilagiri in Balasore district where a man had to carry his dead son on a trolley rickshaw from the Sub Division hospital after being denied hearse facility.

“Balasore Collector has been asked to inquire into the matter pertaining to non availability of vehicle under Mahaprayan scheme to carry body of a minor in Nilagiri. Stringent action would be initiated against those found guilty,” Commissioner-cum- Secretary of Health Department Pramod Kumar Meherda said.

Worth mentioning, Sunaram Singh’s son was bitten by a venomous snake this morning. When the kid complained of dizziness and started vomiting at around 5.30 am, 108 ambulance service was dialled. However, the ambulance did not turn up owing which Sunaram rushed his son to the Sub Division hospital on a two-wheeler.

However, the six-year-old Krishna died while undergoing treatment at the healthcare facility at around 8 am.

“I had to take my son back home on a trolley rickshaw. As there was no vehicle in the hospital except 108 ambulance and Janani Express, I carried him on my trolley rickshaw after the post-mortem formalities were over,” said a sobbing Sunaram Singh, a resident of Station Bazar area of Ward No 11 under Nilagiri NAC.

The distressed father claimed that he urged the authorities for a hearse van which was turned down. He had to peddle his dead son on the trolley rickshaw for around 2 km.

On the contrary, the Nilagiri Sub Collector refuted the claims saying, Sunaram did not seek any hearse service and arranged transport on his own as his house wasn’t far off.

We have approved Rs 3000 from Harishchandra Sahayata Yojana after coming to know about the incident, Nilagiri Sub Collector Ghasiram Murmu added.

This incident brings back the Dana Majhi incident to the fore where a tribal man from Kalahandi had to carry his dead wife on his shoulders to his home after being denied hearse service.