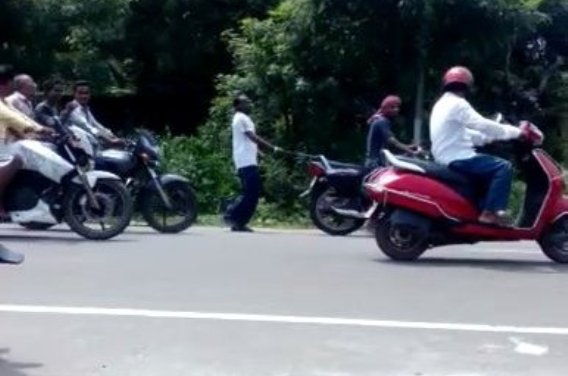 Bramhagiri (Puri): A man was chained to a motorcycle and then dragged for around one and half kilometres here in Odisha’s Puri district today for allegedly harassing a woman over mobile phone.

The shocking incident took place at Bentapura under Bramhagiri police station in the district.

According to reports, the accused had allegedly harassed a woman over mobile phone and  sent objectionable texts on the device.

Fed up, the woman discussed the matter with her family and contemplated to take legal recourse. In a bid to teach a lesson to the ‘romeo’, the relatives of the victim today caught hold of him when he was roaming in a market at Bentapura.

The accused was tied to a bike and made to jog behind the two-wheeler while a group of men on motorcycles followed the duo. Interestingly, no one came forward to intervene into the matter but the mute spectators shot the act on mobile phones. Later, the shocking video was circulated on various social media platforms.

“No case has been registered so far in this regard. We can not file a case suo motu from our side. If no one registers a case, we would definitely lodge a case. We are questioning the accused to ascertain the veracity behind the allegations,” a police official of Brahmagiri police station said.

Meanwhile, police have detained both the accused and bikers for questioning.