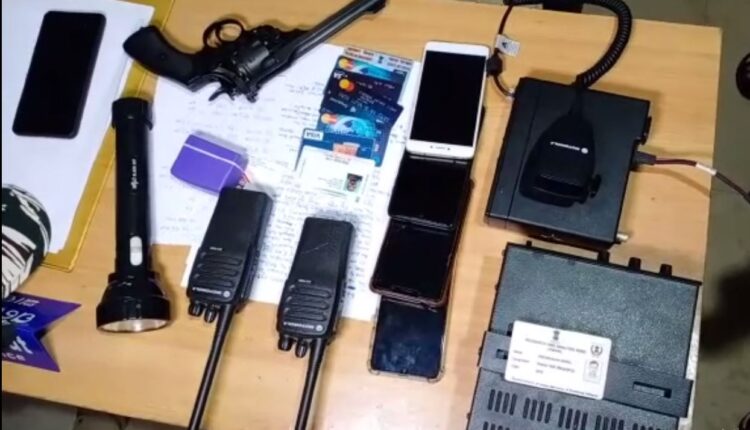 Balasore: It looked like a scene of a Bollywood movie was being enacted in front of Khantapada police station in Balasore district when a person identifying himself as a RAW agent got down from a scorpio vehicle with red beacon and fired in air asking police personnel and people to clear the traffic jam.

The police personnel got confused with the person’s activities. However, they caught hold of the person identifying himself as a RAW agent and searched his vehicle. To their utter surprise, a pistol with live bullets, walkie talkie and GPS were recovered from the possession of the person.

Later the person was found to be an imposter during questioning. Police arrested the fake RAW agent, Priyaranjan from Nahada village of Ganjam district and driver of the vehicle, Pankaj Kumar Singh from Baripada area.

As per reports, some Constables were clearing a road jam near Begunia on NH-16 when an overturned tomato laden truck was being removed from the road yesterday evening. At around 9 pm, Piryaranjan and Pankaj arrived in a Scorpio bearing registration no OR 05 AF 5857 at the spot.

Identifying himself as a RAW agent, Priyaranjan directed the police personnel and people to clear the road immediately. Moreover, he fired in air which created a panic among people and put police personnel confused.

Even though the Police Constables allowed the scorpio vehicle to move, the activities of Priyaranjan raised suspicion among them. The police personnel immediately informed the Khantapada IIC Paresh Kumar Rout who chased the Scorpio vehicle and informed the Shergada police to frisk the vehicle at Sheragada toll gate.

Accordingly, the police personnel at the toll gate instructed the Scorpio to stop. But the driver hit the barricades and tried to run over the cops. Priyaranjan then tried to hoodwink the police and posed as a RAW officer.

The suspicion grew further and police searched the Scorpio. A gun with live bullets was recovered from the vheicle. Following this, the duo was taken into police custody.

Based on complaints filed by Constables, two cases were registered at Khantapada police station.
The Khantapada IIC said the duo has been forwarded to the court today. Investigation is on and the duo will be brought on remand soon, he added.

There are pending cases against Priyaranjan at Gangpur police station in Ganjam district.