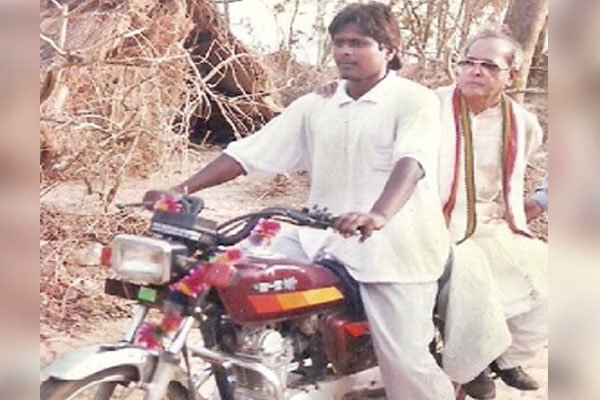 Kendrapada: Taking a stroll down the memory lane, when he took late former President Pranab Mukherjee on rounds on his motor-cycle in Kendrapada district during the 1999 Super Cyclone, one Tarunkanti Kanchilal expressed grief over the demise of the ‘Bharat Ratna’.

It goes back to the 1999 Super Cyclone that stripped Odisha of its greenery and wealth. Pranab Mukherjee served as a Member of Parliament (MP) then. He had visited Kendrapada district for a post-cyclone review and there he met Tarunkanti, a millennial from Ramnagar area under Mahakalpada block.

Seated on Tarunkanti’s motor-cycle, the former President visited Ramnagar, Kharinasi, Petachhela and other affected areas in the district. He was in charge of distributing relief in the cyclone-affected areas and ensure other necessary assistance for them. That was Tarunkanti’s first encounter with Pranab Mukherjee.

The next meeting between the two was in Raj Bhavan in Bhubaneswar when Pranab Mukherjee visited Odisha as the President of India in 2013. On Mukherjee’s command, Tarunkanti was invited to the Raj Bhavan and so he reached there with coconuts as a token  of love for the former.

Later, in the consecutive years of 2014 and 2015, Tarunkanti had met Pranab Mukherjee in the Rashtrapati Bhavan in New Delhi.

On the demise of the former President,  Tarunkanti, who held immense affection and respect for him, said he lost a father-figure from his life.

Odisha: Restrictions on cremation at Puri Swargadwara to remain in force till Sept 30