Sources said the farmers, in absence of a road or bridge, had to resort to this make shift arrangement as a last option for their livelihood as they have to put their lives at risk every day while swimming across the river to their fields. 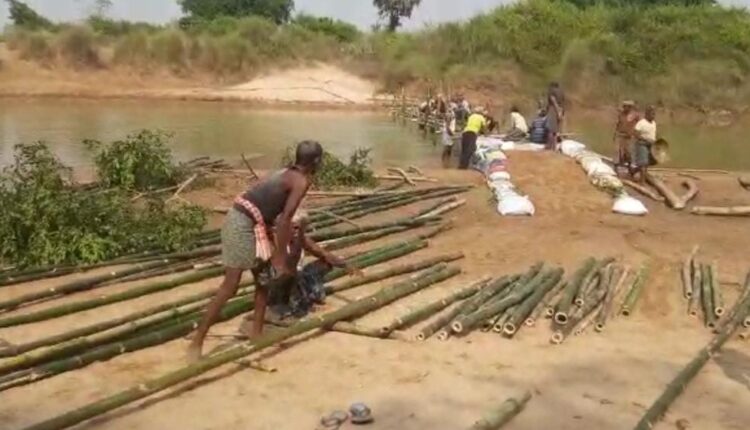 Bhuban: Odisha’s Nilakanthapur village in Dhenkanal district may have scored a place in history as the home of India’s youngest freedom fighter Baji Rout but even 75 years after Independence, development continues to elude the local residents. The village, in 1926, had shot to limelight after the 12-year-old laid down his life while rising against the British. But today, it paints a sorry picture as basic amenities like road and bridge connectivity continue to be a far-fetched dream for the people here.

The plight of locals here has once again come to light after farmers in the village, after being deprived of a proper bridge for years, were recently seen voluntarily coming together to build a bamboo bridge across the Brahmani river. Sources said the farmers, in absence of a road or bridge, had to resort to this make shift arrangement as a last option for their livelihood as they have to put their lives at risk every day while swimming across the river to their fields.

Home to a population of 1525 with 245 families, the village, which comes under Mahulpal Kanapal panchayat of Bhuban block, was divided by the Brahmani river with their agricultural farmlands on the other side. With farming and fishing as their major means of sustenance, crossing the river was a daily routine for the farmers.

But with rising cases of mishaps and drowning, wading across the water body became an issue specially for female farmers. Sources said their plight worsened during monsoons when their paddy and vegetable crops were damaged due to standing water but they were unable to swim to the other side due to the swelling river. This started to impact their livelihood as most of the time, the villagers were unable to carry out their daily business. Left with no other option, they volunteered and constructed a bamboo bridge in two days’ time recently.

Sharing their angst, the villagers said the government has come up with so many initiatives but not even once considered the plight of farmers here who have to put their lives at risk daily just to go to work. They have also demanded that the government come up with solution to their problem at the earliest. “Farming is our bread and butter, We can go to any lengths to fill our stomach. But is this what we deserve? There’s no count of people who have drowned while crossing the river and this is what we face on a daily basis just to go our fields. We demand that the government ensure proper bridge connectivity to us at the earliest,” said female farmer Mamina Sahu.

Geographically, the region including Nilakanthapur was considered an island prior to 2016 with accessibility being a major issue. In 2004, bridge work started at Rangamatia while Baji Rout Setu came up four years later. A bridge over Pandara canal started in 2015 and was completed the following year. While connectivity improved in all these surrounding areas,  Nilakanthapur has seen no such development over the years.