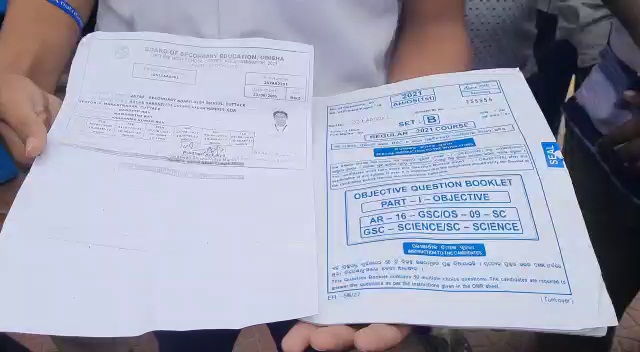 Cuttack: In what could be termed as a major blunder by the Odisha Board of Secondary Education (BSE), as many as 20 students appearing for the offline Matric exam at the Board High School here were given ex-regular question papers of the year 2014.

The goof-up came to fore around 11.30 AM, around 1.30 hours after commencement of the exam at 10 AM. Following the fiasco, the invigilators gave this year’s regular question papers to the examinees.

“By the time we realised that the question papers were of 2014 ex-regular category, we had answered the objective section and were writing the answers for the subjective part. We apprised the invigilators about the matter, after which they gave us the regular question papers around 12 noon. We were allowed to write the answers till 1 PM,” an examinee said.

Another examinee alleged that the students were given an overall time of 1.5 hours for writing the answers instead of the stipulated 2 hours.

On the other hand, Dilip Kumar Behera, Headmaster, Cuttack Board Office accepted the occurrence of the erroneous incident.

“Though wrong question papers were given to the students, the issue was later resolved. The examinees faced no problem during the exam,” he said.

Worth mentioning, the State Government had cancelled this year’s Matric examinations due to the COVID-19 situation. However, the BSE later decided to conduct an offline/ improvement examination for those not satisfied with their marks allotted through alternate assessment method.