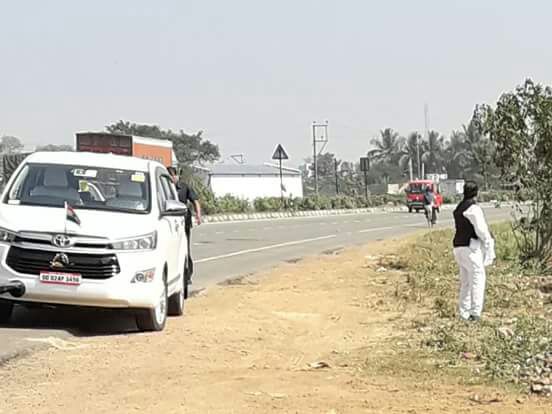 The pictures of the BJD vice president peeing under the open sky have gone viral on social media platforms.

While the minister has made a mockery of sorts of Prime Minister Narendra Modi’s ambitious Swachh Bharat Abhiyan, the incident refreshes the memories of Union Agricultural Minister Radha Mohan Singh doing similar act, flanked by security guards earlier in July this year.

Twitterati have reacted sharply to this incident. While some lambasted the minister, some made fun of it.

In the picture, the Digapahandi legislator is seen attending to the nature’s call along a highway while the security guards were manning his official vehicle.

The Swachh Bharat Abhiyan launched since 2014 aims at making India open defecation free by building toilets and sensitising people to use lavatories. In reality, there aren’t sufficient public toilets leaving people with no chance but to relieve themselves in open.

At the time of publication, Odisha Sun Times could not independently verify the authenticity of the pictures, or the location and time the pictures were clicked at.

WhatsApp stops working on these smartphones