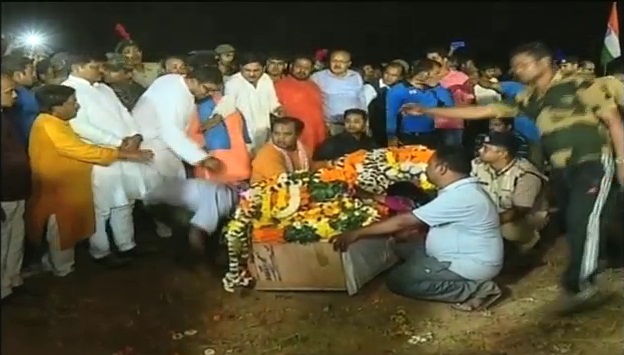 Bhubaneswar: A legislator of the ruling Biju Janata Dal (BJD) in Odisha has come under severe criticism after a video of him allegedly shoving a Pulwama martyr’s kin went viral on social media platforms.

A video circulated on social media shows Cuttack-Barabati MLA Debasish Samantaray apparently shoving a man said to be the uncle of martyr Manoj Behera from Ratanpur village near Niali during his cremation.

The lawmaker reportedly made Manoj’s uncle sit on the ground while being photographed and videographed at the village in Cuttack district on Saturday night, moments before funeral.

The BJD MLA has been trolled on Twitter and the issue has set off political mudslinging.

The opposition parties have condemned the behavior of the politician seeking action against him.

On the contrary, the ruling party has come in defence of Samantaray.

“The way the matter is being painted on social media is inappropriate. Somewhere, there is an attempt to show the video in a fabricated manner, which has no basis. If the family members haven’t complained, why the opposition parties are doing politics over it?” BJD spokesperson Sasmit Patra said.

“I condemn the mistreatment of the kin of Odisha’s brave son Manoj Behera, who was martyred in the Pulwama attack, by a BJD Lawmaker. This kind of reprehensible behaviour when the entire nation is standing with the families of our bravehearts shows the true character of the BJD,” Patnaik tweeted.

“The insensitivity and inhumanity with which BJD MLA Debashish Samantaray treats the kin of braveheart Manoj Behera who made supreme sacrifice for the nation will make any patriot’s blood boil. This deep-rooted arrogance and feudalistic mindset is what BJD is all about. SHAMEFUL!,” the senior Congress leader added.

The Bharatiya Janata Party (BJP) too bayed for Samantaray’s blood over the controversy.

“It is quite evident from video footage that MLA Debasish Samantaray is manhandling the kin of Pulwama martyr. It is disrespect to the martyr. It shows to what level they have stooped. He should be arrested immediately. He has hurt the sentiments of people of Odisha. If the state government has any sense of remorse then it should get the legislator arrested immediately,” said BJP leader Lekhasree Samantasinghar.

While the incident came as a huge embarrassment for the BJD, the leader embroiled in controversy had to tender apology.

“During cremation of the martyr, there was some disorder at the village for which I tried to put the things in order. I tried to manage crowd without knowing that the person was martyr’s relative. If I have hurt the sentiments of anyone unknowingly, then I offer apology,” Debasish Samantaray said.