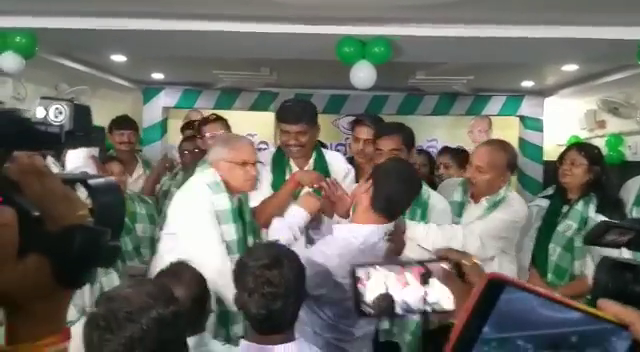 Bhubaneswar:  In a disgraceful act, Berhampur MP Chandrasekhar Sahu of the ruling BJD slapped a young leader in full public view during a party meeting held in Paralakhemundi  of Gajapati district yesterday.

The video of the ‘cruel’ act that went viral on social media in no time has triggered a huge outcry among the people of all walks of life.

At an executive meeting of BJD, where a huge crowd including party leaders, workers and general public had gathered, the 69-year-old Parliamentarian slapped Sangram Sahu, ex-president of Congress district unit. Sangram had attended the meeting to join the ruling party.

In the video, one can see when Sangram went up on the stage, a party leader offered him a shawl as formality. Instead of wearing the shawl, Sangram offered the same to the MP. But the Parliamentarian got angry to this gesture for reasons best known to him and gave him a tight slap in return.

Surprisingly, while the incident has been captured on camera, the young leader is purportedly trying to downplay the incident by refuting the report.

“He (MP Chandrasekhar) has not done anything that sort of. He is like my elder brother. I had gone there to join BJD,” said Sangram.