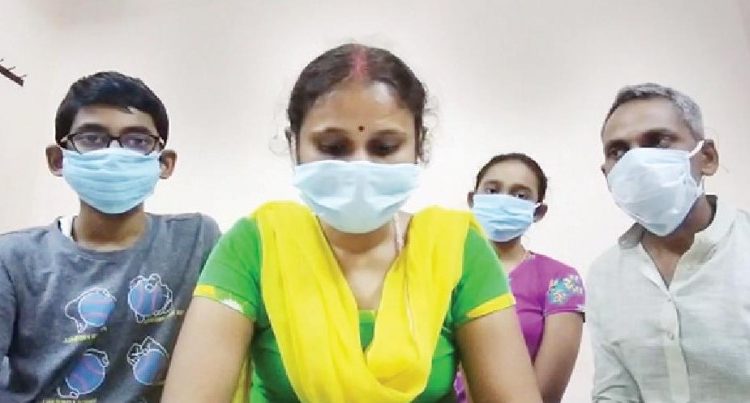 Bhubaneswar: Amid battle against coronavirus, seems like influx of migrants is a jinx for which an Ayush doctor with a travel history went through a traumatic experience in Odisha capital.

Dr. Rakhi Singh, an Ayurvedic doctor, had recently returned to Odisha from Hyderabad. Neither she was allowed to stay in government quarantine nor was she able to go back to Telanagna.

According to complaint lodged by her husband Sudhir Kumar, Dr Singh had reached Bhubaneswar along with her children on May 3 night after getting permission from the government. She had followed all the procedures set by the State Government for returnees. She went to Gandarpur area on outskirts of Bhubaneswar under Nandankanan Police limits where her husband was residing at a rented house. As she was instructed to stay in home quarantine, as per the norms, she had informed about her arrival to the concerned nodal officer and police official.

However, the villagers opposed her entry into the area. When the officials sought assistance from the sarpanch, who is vested with Collector power for COVID-19 crisis, did not allow the Ayush doctor for home quarantine in the village citing ‘no official communication’ has been made in this regard.

Being disappointed over the incident, the couple had approached the Nandankanan Police that also failed to assist them following which the doctor and her family had to spend entire night inside a car.

Next morning, the police suggested them to stay in quarantine at a school in Gandarpur. However, after seeing the family, the villagers started pelting stone at them and threatened them to set them on fire.

The frightened family rushed to the DCP office for help. During verification of their documents, police found her Aadhar card had the address of Niladri Vihar and the registration had been made accordingly with the Government. She was asked to visit Chandrasekharpur Police Station for necessary help.

The doctor also faced disappointment from Chandrasekharpur Police. With no option left, the family urged the Government to return to Hyderabad during lockdown. But, their plea was also turned down. Again, they reached the Nandankanan Police Station where the police suggested them for quarantine at a hotel at expenses of Rs 1800 per day. After they did not agree with the police on the proposal, they were kept in an institutional quarantine centre set up at a college.

When asked to Commissionerate Police regarding the issue, Commissioner Sudhansu Sarangi said that the matter is being investigated.

If required, case will be registered against the locals who opposed the doctor and her family at village, he said.

Defending the locals, sarpanch Prabhasini Sasmal said that she had no official information on return of the doctor to the village.

“The doctor’s registration was made at Jayadev Vihar area. As she does not belong to the village, it was not possible to allow her to stay here in home quarantine. Personally, I had taken her to Gandarpur for quarantine, but the villagers opposed it,” the woman sarpanch said.