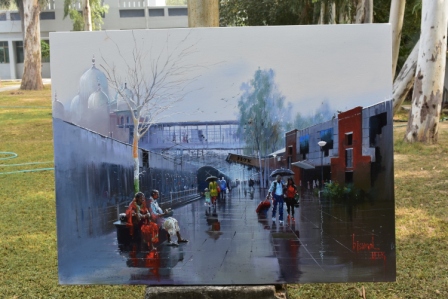 Bhubaneswar: Acclaimed Odisha-born painter Bijayananda Biswaal better known as Bijay Biswaal (52) has poured grey interspersed with bright red and yellow to create a stunning painting depicting loneliness and longing of middle-class parents of an IITian, who has left for a distant foreign land to earn a few extra bucks leaving them behind to care of themselves.

A painting titled ‘The Great Expectation’ by Biswaal tells the story from a parent’s point of view starting from the day a student reaches Kanpur Railway station till he or she gets placement.

Biswaal was among the 14 renowned artists who were invited by the Indian Institute of Technology, Kanpur to create paintings on campus life and incidents most of the students go through in their life at the premier engineering college.

The event was held between November 6 and 12 and all the 14 artists were asked to spend time on the campus and then create paintings showcasing the life at IIT since joining of the students.

The world renowned painter has created 3 paintings during the 6-day event. In one of his paintings, it was seen a middle-aged man and woman were sitting in a railway station near a banyan tree waiting for their son who was studying in IIT-Kanpur.

Explaining in detail about his painting and purpose behind it, the former train ticket examiner said the thought was to highlight the issue of brain-drain for which the IITs face strong criticism over the years.

“I put a banyan tree as it is considered a symbol of knowledge in our society and the old man and woman in the painting symbolizes our country who are seen waiting for their son who had gone to a foreign country after passing out from IIT in order to make more money,” the 52-year-old artist added.

He felt most of the IITians left their old and ailing parents at home once they get high-paying jobs in other countries which is seen a very painful and disturbing trend in India.

The globally famous artist has also created two other paintings – one focusing at sports and physical activities and faculty building at IIT-Kanpur.

The first-of-its-kind event was organised by IIT-Kanpur in association with Mumabi-based online art gallery ArtZolo to preserve and promote life and culture at an IIT.

Speaking to OST, the globe-trotting artist said he tried to tell a real story through his paintings which every student and parent can relate to. “When a student takes admission in an IIT his or her parent has a lot of expectation and also equally concerned about how their children will adjust to a new environment in a new city. My paintings reflect all of that,” said the self-taught artist.

Hailing from Pallahara village in Angul district in Odisha, Biswaal had called it a day from Indian Railways in April this year with an aim to take art and painting to the grassroots.

Known for beautifully capturing trains, platforms and myriad moods of people, Biswaal’s breathtaking art has touched many hearts including none other than PM Narendra Modi, who had praised Biswaal in his popular radio programme ‘Man Ki Baat’ on July 26, 2015 after he sketched Modi as a ‘man among common man’ at a railway station in one of his paintings.

In order to devote more time for his creative pursuit, Biswaal opted for VRS on March 31 after serving railways for 26 years.

He visited Turkey in April followed by Russia and Denmark in September besides a visiting faculty in many arts colleges in the country.

Settled at Godhni in Nagpur of Maharashtra, commercially Biswaal’s paintings are in big demand all over the world.

Updating us about his upcoming events, the immensely talented artist said he was invited to showcase his paintings at Kalakriti Art Gallery in Hyderabad from November 24.