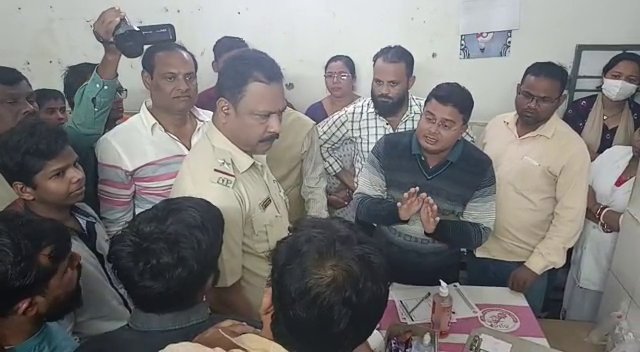 Titilagarh: Tension ran high at Titilagarh Sub-Divisional Hospital (SDH) in Odisha’s Balangir district over death of a patient during treatment.

According to reports, Habiba Banu (20), a resident of Hatapada area, was suffering from fever, cough and cold in past two days. She consulted the doctor at Titilagarh SDH and took medicines as per prescription. After her condition did not improve, she visited the hospital again for treatment.

After attending to the patient at the OPD, the doctor prescribed an injection that her family collected from the drug distribution counter in the hospital. A nurse administered the injection to the patient following which her condition deteriorated. Habiba’s mother, who was present with her at that time, was forcibly removed from the place after she questioned the nurse for critical condition of her daughter. The patient was administered four more injections following which she died at the hospital.

Reacting to the incident, the family members of the deceased patient created pandemonium in the hospital. They alleged that the patient died due to faulty treatment and administration of a wrong injection.

When hospital authorities tried to pacify the situation, the irate family members demanded arrest of the concerned doctor and nurse for death of the patient.

Speaking on the incident, SDMO Dr Pradeep Nayak said that the woman patient had multiple complications when she had visited the hospital. She had breathing problem and kidney-related issue as well. The doctor attending to her had tried his best to save her life. She was given all types of life saving shots during treatment. But, she died unfortunately.

However, necessary action will be taken after investigating into the incident and interrogating the concerned doctor for death of the patient, he assured.