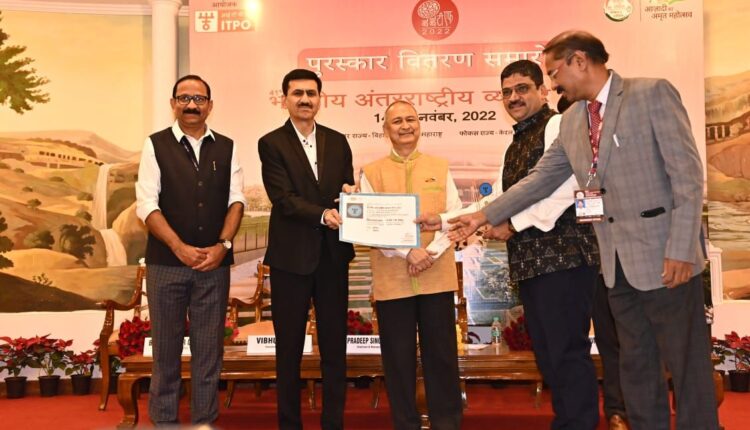 New Delhi/Bhubaneswar: The Odisha Pavilion has been awarded with the prestigious ‘Special Appreciation Certificate for Excellence in Display’ in the category of ‘State Government and Union Territory’ at the 41st edition of India International Trade Fair (IITF), 2022 held at Pragati Maidan in New Delhi.

The trade fair, which began on November 14, concluded today. Information and Public Relations department Director Indramani Tripathy and Odisha Pavilion at IITF, 2022 Director Subash Nial received the award from ITPO Chairman and Managing Director Pradeep Singh Kharola in a special ceremony during the concluding day of the fair.

Odisha Pavilion has been selected for the award after a series of visit by the jury members to different pavilions at the fair. Altogether 29 states and Union Territories, big corporate houses and several foreign countries participated in the mega fair.

The Odisha Pavilion, which was inaugurated by Panchayati Raj, Forest, Environment and Climate Change, and Information & Public Relations Minister Pradip Amat, showcased numerous products manufactured by the rural women artisans and entrepreneurs of the state under the theme of ‘Vocal for Local, Local to Global’ in line with Chief Minister Naveen Patnaik’s vision to empower the women and rural entrepreneurs of Odisha.

The Odisha Pavilion had been designed and decked up to highlight various initiatives and developmental works of the state government. It also showcased the rich cultural heritage, handicrafts and handlooms of Odisha which were great attraction for visitors in the trade fair.

A total of 24 stalls had been opened in the Odisha Pavilion where famous handloom and government owned handicrafts and handlooms outlets like Boyanika and Utkalika along with various departments and agencies of the state government such as Agriculture and Farmers’ Empowerment, ORMAS, SERIFED, Mission Shakti, Industries, ST&SC Development, Start Up Odisha displayed their products.

Upcoming events like Make in Odisha Conclave-2022, Hockey Men’s World Cup-2023 as well as Millet Mission mascot ‘Mili’ were also prominently displayed in the pavilion. The Odisha Pavilion was conceptualised by M/s Virtu Communications of Bhubaneswar and fabrication was done by Bharati Chitralaya, Cuttack.

On November 24, the Odisha State Day was celebrated at Amphitheatre-1 of Pragati Maidan. Cultural extravaganza marked the celebration with the enthralling performance of various cultural troupes.

Cultural and Dance programmes like Odissi, Dalkhai, Bajasal and modern fusion dance were performed in the Odisha State Day celebration. The latest issues of Utkala Prasanga and Odisha Review were also released by the dignitaries.