Odisha police arrest two for murder of a teen in Nayagarh 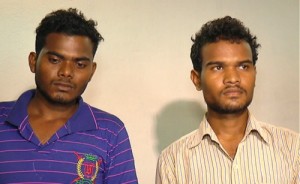 Odisha police today claimed to have solved the murder mystery with the arrest of two persons for their alleged involvement in the gruesome murder of a 19-year-old girl in Bijipur area under Itamati police limits in Nayagarh district.

The accused identified as Laxmidhar Behera was arrested by police for allegedly killing a young girl over a failed love relationship. Besides, Behera’s accomplice Pradeep Pradhan was also arrested for helping his friend in the crime.

“Laxmidhar Behera from Barapalla village under Sadar police limits has murdered the girl. His friend—Pradeep Pradhan—has been arrested for taking the accused to the site,” Nayagarh SP Manoranjan Mohanty said.

It may be recalled that a body of a young girl was found in a paddy field in a pool of blood with her throat slit on May 10.

The deceased identified as Manini Pradhan had gone out of her home to attend nature’s call the previous night of the murder and did not return.

Her hair clip, a torch, and a knife were found near her body in the paddy field. She was a student of Plus II Arts in Bolagarh College, sources said.