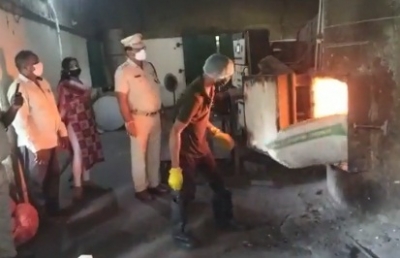 Bhubaneswar: Odisha Police have destroyed nearly one tonne of contraband ganja, which were seized from the exclusive possession of accused persons, police officials said here on Wednesday.

“Following due procedure laid down by Orissa High Court and on the decision of drug disposal committee led by SP, Special Task Force (STF), Bhubaneswar, the drugs were destroyed at a designated incinerator in the presence of scientific officers of state forensic science laboratory and members of State Pollution Board,” the officials from STF said.

The STF had seized the ganja in August, 2021 and registered a case against the accused persons under NDPS Act, 1985.

The seized drugs were first certificated by a concerned court and handed over to the drug disposal committee for destruction. This is the first ever pre-trial disposal case, they said.

In the recent years, during a drive against narcotics, especially ganja and brown sugar by Odisha police, there has been huge piling up of seized narcotic drugs.

As the trial of narcotics cases takes time, these seized drugs remain stocked at police stations or court Malkhanas exposed to all kinds of vulnerabilities.

However, because of some procedural and technical ambiguity, seized drugs could not be disposed of. In this backdrop, the STF had approached the High Court of Orissa with a prayer for a certain direction to resolve the issues, informed the officials.

Finally, on January 31, 2022, the High Court passed a landmark judgment directing the subordinate courts to dispose of the applications filed under NDPS Act, 1985 issuing a detailed SOP in this regard. Following the SOP, the seized ganjas were destroyed, they added.