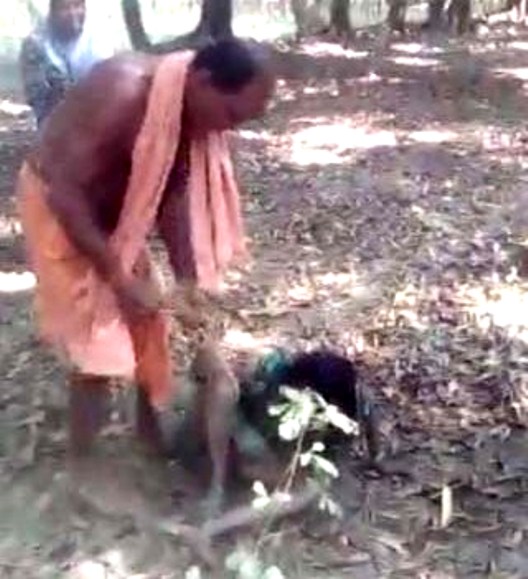 Balasore: The incident of a couple thrashing a mentally retarded minor girl in the most inhuman manner after tying her to a tree with a rope in Sajanpur village under Soro block in Odisha’s Balasore district for allegedly stealing a piece of firewood has shocked one and all.

The incident came to light after a video of the barbaric incident went viral on social media platforms.

After surfacing of the video, the district administration, police and Child Welfare Committee (CWC) are on their toes to initiate action against those accused.

Meanwhile, police after registering a case on the basis of a complaint lodged by the victim’s mother have arrested four persons, identified as main accused Bipin Sahoo, Bharat Sahoo, his wife Bharati Sahoo and Malati Sahoo.

According to locals, mentally retarded minor daughter of Kartik Lenka of Sajanpur village had three days back allegedly stolen a piece of firewood from their neighbour Bipin Sahu’s garden.

Sahu’s wife and their son had severely thrashed the minor girl after tying her to a tree, they added.

“Sahu’s family members have beaten up my daughter by tying her with a rope,” said Ratnamani Lenka, the victim’s mother.

“I have sent three officers to that village. Anyone whoever is guilty will be arrested and forwarded to court,” informed Prabhat Chandra Pal, SDPO, Balasore.

Pay compensation to victim: OHRC on custodial torture by…