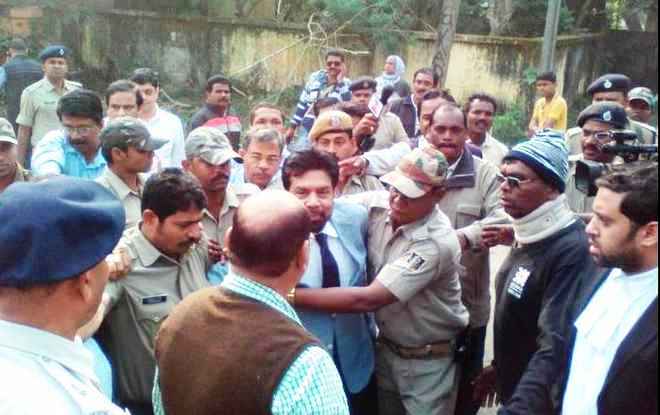 Woes continue to mount for Odisha Stevedores Limited (OSL) Managing Director Mahimananda Mishra as he was today interrogated by police in connection with the 2013 Cuttack Press Chhak bomb hurling case.

According to reports, Cuttack ACP and Madhupatna police station IIC reached Paradip and interrogated Mishra over the incident.

The cops have got strong information against Mishra in the bomb hurling incident and are likely to apply for a five-day remand of the OSL chief, reports said.

Criminal Ganesh Sahu of CDA area in Cuttack has been arrested in the case and the bomb was hurled under Mishra’s direction, police said, adding that seven cases are pending against Ganesh at various police stations of Cuttack.

On the other hand, Mishra was today produced before the Kujang JMFC court as his remand period came to an end. He was later sent to Samagol jail.

In a related development, the court today allowed the Talcher police to take Mishra on one-day remand for further questioning over his alleged involvement in the Jalaram Transport firing case.

The police had moved the Talcher SDJM court seeking Mishra’s remand. The SDJM court had then informed the Kujang JMFC court in this regard.

Mishra was on Tuesday grilled by Odisha Crime Branch officials over his alleged involvement in the kidnapping of Paradip-based JM Bakshi company’s manager Pratap Chandra Das in 1995.

Notably, the Kujang JMFC court had allowed Paradip police to take Mishra on a 4-day remand from January 1 for further interrogation in connection with the murder of Seaways Shipping and Logistics Private Limited (SSPL) General Manager Mahendra Swain.

It may be recalled here that on October 26 shots were fired at Mahendra Swain near Ambedkar Bhawan at Madhuban Colony in Paradip. Two miscreants had hurled crude hand bombs at the SUV in which Swain was travelling. While Swain was fleeing to save his life after alighting from the vehicle, miscreants fired two rounds at him leading to his death.

According to the police, Rakesh Choubey had received Rs 12 lakh cash in advance from OSL in September 2016 to execute Swain. Choubey through his associates got Swain killed on October 26 this year.