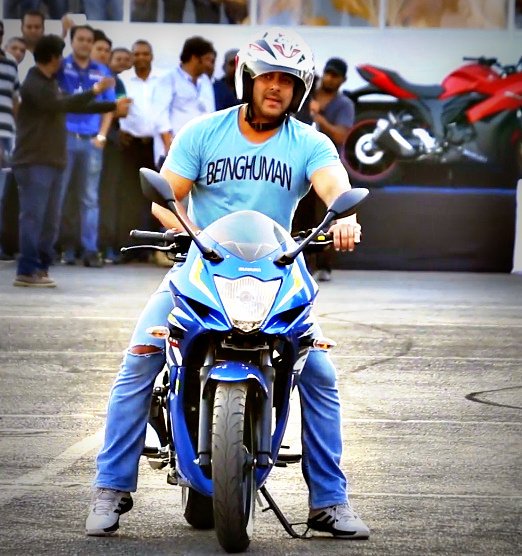 Keonjhar: Anything that Bollywood celebrities flaunt becomes a style statement. Perhaps driven by this idea, Keonjhar police has come up with a plan to create awareness about traffic rules and road safety.

The official Twitter handle of the district police (@spkeonjhar) today started promoting the use of helmets among bikers with using some photos of  Bollywood stars like Salman Khan, Aditya Roy Kapur, Madhuri Dixit and Katrian Kaif who are riding their two-wheeler wearing helmets.

The post was captioned: “you will look even smarter in helmet…… Life is precious…..save it …. “Shaan Se Pahno Helmet”…….”

you will look even smarter in helmet…… Life is precious…..save it …. “Shaan Se Pahno Helmet”…… pic.twitter.com/LdhJ83Nj6K

“Social media is definitely a very powerful tool in today’s time and we are trying to use it to create awareness among people to use helmets while driving two-wheelers,” Keonjhar Superintendent of Police (SP), Jaynaryan Pankaj told Odisha Sun Times.

The SP further said: “It is seen that most of the young bike riders are not using helmets thinking it will kill their looks. That’s why we have used these pictures to convey a message that one can flaunt his or her style even wearing a helmet.”

Safety is more important than style, the district top cop added urging the youngsters to keep in mind while driving.

The Keonjhar police has observed that many motorcyclists are just carrying the helmets in their hands while driving instead of wearing it. The district police had earlier urged these bikers to abandon such practice in a tweet.

many motorcyclists just carry helmet in their hand or putting on head without strapping it…it is a killing habit, this helmet will not save you in accident. A fine of 100 rupees will not make you poor neither the govt will become richer.This is for your safety…kindly consider

Lat year, the Keonjhar police had posted photograph of Baahubali star Prabhas in which he was seen wearing helmet to promote helmet use among two-wheeler riders.

The district police had earlier organised street plays at Barbil, Joda, Bhadrasahi, Beleipada and Champua to drive home their message of safe driving.

Though the Supreme Court made it mandatory for all states to strictly enforce rule for bikers, its enformcement is abysmally poor in almost all districts in the State, Pankaj informed.

The movements of heavy vehicles in the mineral-rich Keonjhar is always a cause for concern as bikers often hit trucks leading increasing number of accidents and deaths.

Official statistics said as many as 312 people died in road accidents in the district in 2017. But thanks to repeated awarenss campaigns, the number of deaths has declined sharply in this year.

The cops had collected over Rs 10 lakh fine from traffic offenders in 2017. However, the fine collection from April to June this year stands at whopping Rs 67 lakh, Pankaj informed.