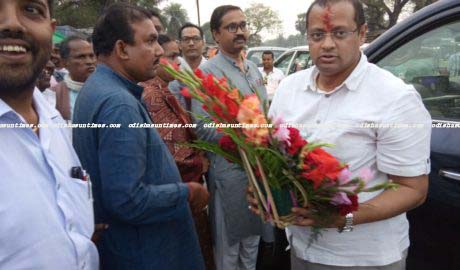 Bhubaneswar: As political pundits predict Odisha will witness toughest polls in the electoral history of the state in the ensuing polls, voters will have a tough time deciding whom to cast their vote for.

With the list of candidates released by the Congress Central Election Committee for seven Lok Sabha seats in Odisha, Navajyoti is now the focus point both for the party workers and the political pundits.

This is the political debut for him to contest the elections for a parliament seat. The party has fielded him for Lok Sabha elections from Balasore constituency, which was the Congress stronghold in the past, with a hope to sow the seed of success for the grand old national party once again.

However, the battle for the seat is likely to be ‘not easy’ as he will face two strong leaders — BJP’s Pratap Sarangi and BJD’s Rabindra Kumar Jena.

Though known in party, Navajyoti is a new face for voters who will exercise their franchise on the scheduled date April 23 in third phase of the general elections in State.

“There is always a beginning and this is my beginning,” he told media after his name was announced for Lok Sabha polls.

If the results of past elections for the Balasore Lok Sabha seat is analysed, Navajyoti is likely to gain Congress votes in his favour. However, BJP’s Pratap Sarangi, who had lost 2014 Lok Sabha polls with a slender margin, will give a tough fight to the other contestants. Similarly, the sitting MP Rabindra Jena has a strong presence in the coastal district which may upset the political fortunes of his opponents.

Vote for BJP to see transformation in Odisha: Modi

Odisha Congress to hit roads from Nov 20 against economic…