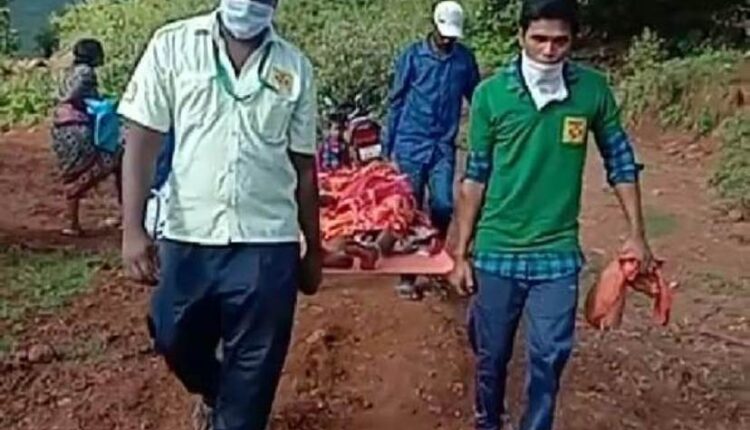 Rayagada: Another expectant mother suffered due to the sordid state of rural infrastructure in Rayagada district today. Due to the absence of an all-weather road to Bhejapadara village under Kashipur block in Rayagada district, a pregnant woman had to deliver a baby near bushes while being carried up to an ambulance.

As per reports, the woman, Monali Naik (25) of Bhejapadara village went into labour in the wee hours today. Monali’s husband then called 108 for an ambulance service to admit her to Tikiri health centre.

Following the call, the ambulance reached up to Silaphasa village, five kms away from Bhejapadara. The emergency vehicle could not proceed further due to the lack of proper road.

Finding no other option, the ambulance’s Pharmacist Santosh Nala, driver Nilakantha Gouda and helper Taudu Mandangi with the help of the woman’s family members carried her in a stretcher walking up to the ambulance.

However, the woman’s labour pain became intense and she delivered a baby with the help of the Pharmacist and her family members halfway. As she bled profusely following the delivery, the ambulance staff somehow managed to carry her in the stretcher up to the ambulance.

Later Monali was admitted to Tikiri health centre where the woman and her newborn are doing fine, said her family members.

Earlier, nine similar incidents were reported from the Kashipur block this year due to lack of proper rural infrastructure.

Odisha: Two held for smuggling huge quantity of bhang in…