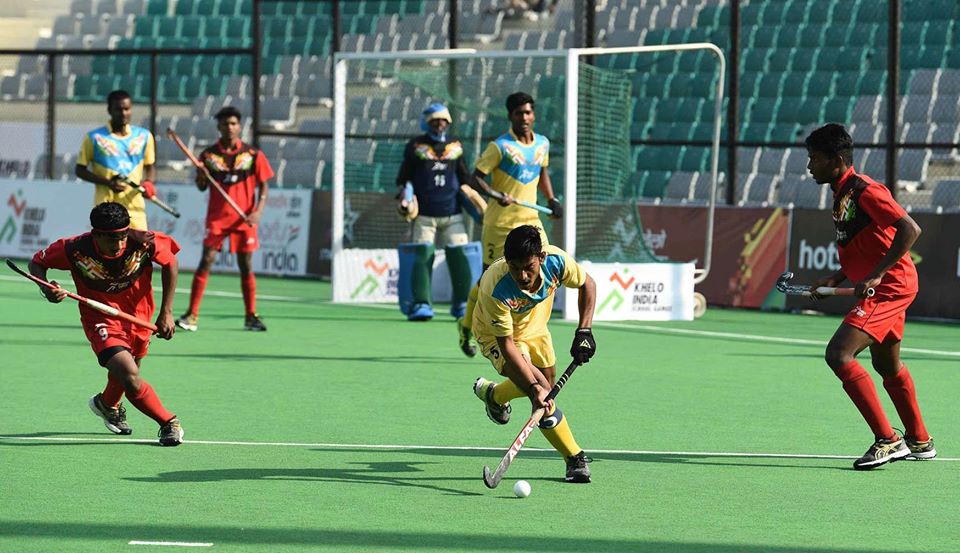 New Delhi: Fancied Odisha had to wage a grim battle before ousting Uttar Pradesh via a penalty shoot-out to set up a summit clash with Punjab in the boys hockey competition at the Khelo India School Games here on Wednesday.

The second semi-final turned out to be a one sided affair with Punjab whipping Chandigarh 5-2.

In the girls’ semi-finals, Subhani Bhengra struck once in each half as Jharkhand piped a spirited Punjab 2-1 to set up a title clash with Haryana.

In the first semi final, Haryana staged a remarkable come back to overturn a 0-2 deficit and overpower fancied Chandigarh 4-3.

Interestingly Haryana had beaten Jharkhand 4-2 in the first league match of the competition.

Both finals will be played on Thursday.

In the first boys’ semi-final, the teams were level at 1-1 at the end of regulation time during which Akhtar Ali converted a penalty stroke to put Uttar Pradesh ahead in the 23rd minute.

A minute into the second session, Samir Ekka drew parity for Odisha .

Odisha won 3-2 in the penalty shoot-out, For the winners, Laban Lugun and Sunit Lakra failed to score in their first and fifth attempts respectively while Sunil Jojo, Sushil Dhanwar and Sudeep Chirmako converted their chances.

In a fast paced semi-final, Uttar Pradesh gave their fancied rivals a run for their money and virtually dominated the midfield in the first quarter.

Odisha made some lightning moves through the flanks but all their efforts were foiled by Uttar Pradesh goalkeeper Vikas Gaur.

Uttar Pradesh piled on the pressure which paid off as Odisha conceded a stroke after one of their defenders blocked the ball by foot on the goal line and Akhtar Ali scored. However they could not defend the lead for long as Samir equalised in the 36th minute.

After that Odisha went flat out on attack forcing their rivals to retreat. However they failed to make use of any of the six penalty corners that came their way.

Vikas also frustrated Odisha with some super saves. Uttar Pradesh had a chance to clinch the match in the 70th minute but Suarabh Khushwa failed to deflect the ball into the empty cage.

Punjab outclassed Chandigarh in all departments of the game and led 4-1 at half-time. The goal scorers for Punjab were Rahul (2), Agyapal Singh and Angadbir Singh (1 each). Amandeep and Sukhman Singh chipped in with a goal each to reduce the margin for Chandigarh. (IANS)