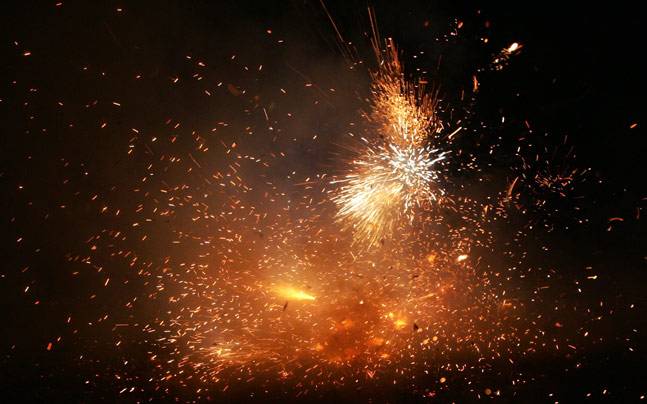 Bhubaneswar: The Supreme Court’s order limiting the duration for bursting firecrackers between 8 and 10 pm has been ignored in Odisha today as people began bursting high-decibel firecrackers soon after the sun started setting.

Residents in the twin cities of Cuttack and Bhubaneswar too brazenly violated the SC order by lighting firecrackers ahead of ‘permitted slots’.

Earlier, the Commissionerate police (CP) had issued safety guidelines with regard to bursting of firecrackers as per the directives of the Supreme Court.

According to the guidelines, residents were directed to burst firecrackers between 8 pm and 10 pm. Firecrackers with more than 125 decibels and China made garland crackers have been completely banned.

However, with several communities celebrating Diwali on Wednesday evening, the sound of crackers could be heard from early in the day. The frequency rapidly went up as the sun set.

People took to the social media to state that fire crackers have been going off at many places despite the SC order. And, some even complained there was no sight of PCR vans where people were opening violating the rule.

Five special trains to Odisha to bring back 5,000 stranded…

High decibel crackers with a defeaning sound are being burst next to a Pvt hospital near my house . @cpbbsrctc had advised not to burst crackers within 100 metres . SC orders up in smoke at Cuttack https://t.co/VUDBzY3L44

Taking to social media, some people stated that people, as usual, burst traditional firecrackers which is very noisy and harmful for the environment instead of “green crackers” mooted by the SC.

The police, however, registered no cases in this regard till the time of filing of this report. “We have not received any complaints so far,” said Police Commissioner Satyajit Mohanty.

As per the law, the police can register cases under Sections 188 (Disobedience to order duly promulgated by public servant), 285 (Negligent conduct with respect to fire or combustible matter) and 291 (Continuance of nuisance after injunction to discontinue) of the Indian Penal Code.