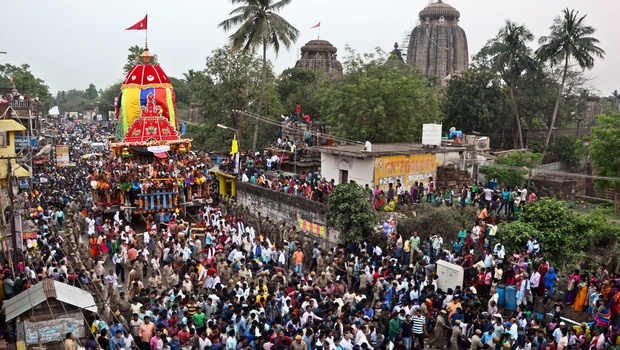 Bhubaneswar: Festive fervour grips the denizens of Odisha capital as the famous Rukuna Jatra of Lord Lingaraj begins today. This festival is observed on the eighth day during the waning moon phase in Chaitra month as per the Hindu calendar, also known as Ashokashtami.

Thousands of devotees throng the Lingaraj temple and the lanes of Bhubaneswar’s Old town to pull the chariot.

The festival starts with ‘Mangala Arati’ and is followed by Sahan Mela darshan. The bronze idols of three deities- Chandrashekar representing Lord Lingaraj, Rukuna, and Ananta Vasudeva are brought to the chariot amid blowing of conches and chanting of religious hymns.

The four-wheeled 35-ft chariot is pulled from this 11th-century shrine to Mausima Temple, with tight security arrangements in place. After reaching the temporary abode, the deities stay there for four days. Goddess Parvati visits the trio on day 3. Upset over not being taken along her consort Lord Lingaraj in the chariot, She breaks a portion of the chariot and returns to the temple.

On day 5, Bahuda i.e., return journey begins. Unlike the Bahuda Ratha Jatra at Puri, the chariot here is not turned around but instead drawn to the temple on the reverse.

The uniqueness of this festival lies in the auction of water from Marichi Kunda, the holy water said to cure infertility in women and bless them with a child. Various arrangements are made for devotees during the ‘yatra’, which witnesses heavy footfall.