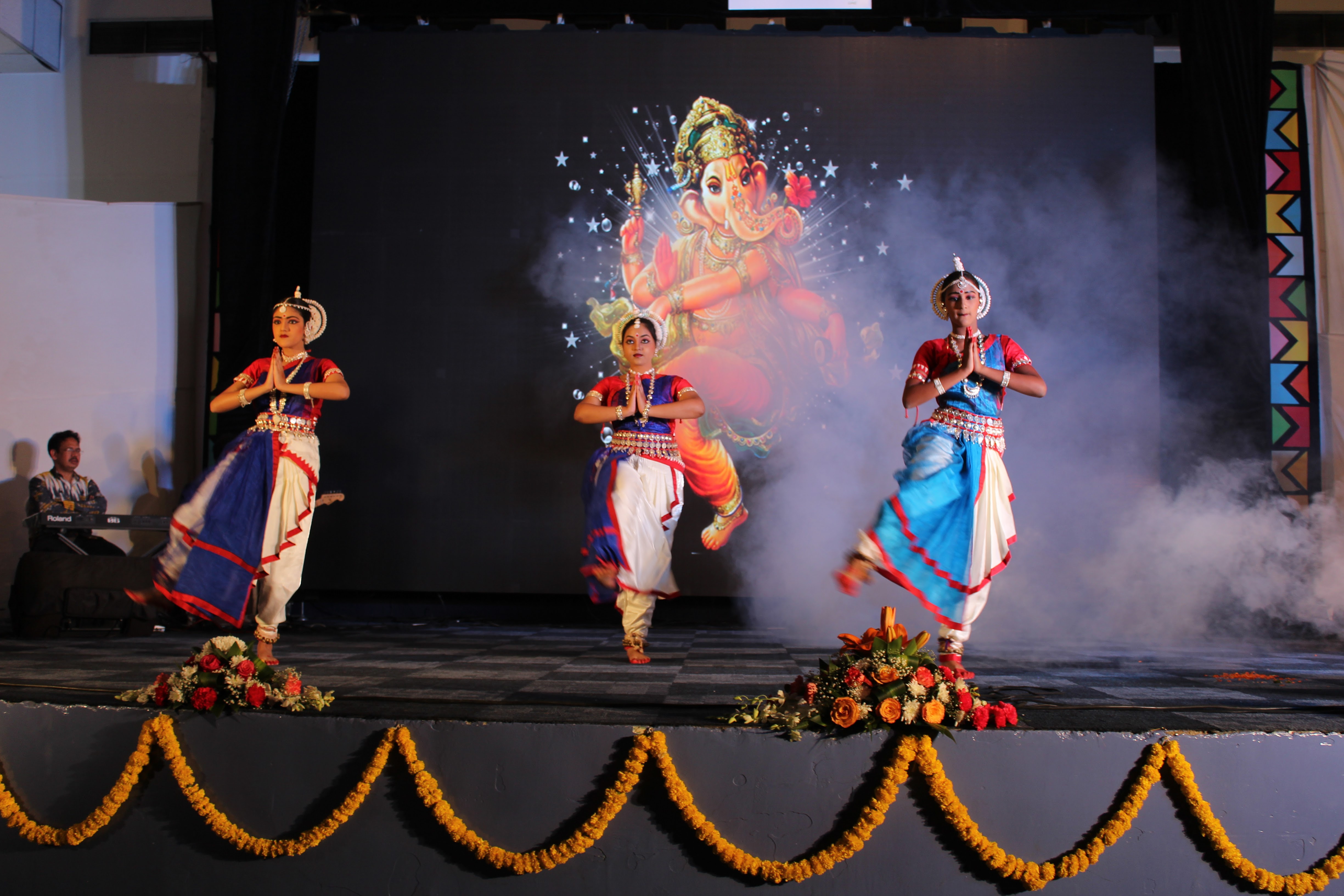 A packed crowd of more than 500 Odias including men, women and children across all age groups attended the program. Odias from neighboring countries like Bahrain were also in attendance.

The evening started with an invocation to Lord Jagannath. His blessings were sought for all and for the successful completion of the program. It was followed by the singing of the iconic Odia patriotic poem written by Kantakabi Laxmikanta Mohapatra – ‘Bande Utkala Janani’. Alongside ‘Bande Utkala Janani’ two ladies dressed in traditional Odissi attire performed some stunning dance moves. ‘Mangalacharan’, the traditional invocatory item in the Odissi repertoire followed. This performance by 3 children had an amazing effect on the crowd and set the tone for the evening.

After this, a dazzling spectacle of song, dance, music & fashion unfolded before the packed hall. Over 75 children, men and women (living in the UAE) who had been practicing for months for the event, took turns at performing on the specially decorated stage.

There were group dances by children who danced on new and old Odia Film Songs. These dances which transported the audience into a bygone era, stole the hearts of the audience and were much appreciated by them. Odia songs and a Sambalpuri group dance performance stirred the crowd. There was another performance of Odissi by children which depicted the ‘Mahisasura Mardini’ avatar of Goddess Durga. Kids performed this dance with the grace and poise of professionals.  One of the highlights of the evening was the fashion show – ‘Weaves and Arts of Odisha’. Handlooms of Odisha like Sambalpuri, Pasapalli, Sonpuri, Bomkhai  etc and patterns from Pattachitra were showcased by the beautiful ladies of Odisha Samaj of UAE.

The chief guest at UTSAV-2017 was Baijayant ‘Jay’ Panda, Lok Sabha MP. In his speech Panda said that he was very happy to be among so many Non Resident Odias and was overjoyed to see them doing so well in their lives. He was very optimistic about Odisha’s future and talked about how much Odisha has progressed in the last few years. He urged all Odias to evaluate making investments in their homeland and to take advantage of the huge opportunities that the state has to offer.

Special Guest at the evening was Vipul, Consul General of India, Indian Consulate, Dubai. Vipul recalled with fondness his days in Rourkela, where he was based for a few months as an employee of the Rourkela Steel Plant at the beginning of his career. He assured of his cooperation and support to the Odisha Samaj in all their efforts.

Guest of Honor at the event was Vineet K Dudeja, Chief Executive, GCC Operations of Bank of Baroda. Dudjea said he was very impressed by the display of Odia culture and dance and said he was happy to be interacting with Odia people.

According to a Yogesh Bhayani, President of the Odisha Samaj UAE (OSUAE), UTSAV has become the biggest gathering of Odias in the region and is growing in stature with each passing year. The entire community looks forward to this event with lot of expectations.

A souvenir brought out on this occasion was also released by Guests and other eminent personalities. The souvenir contains many interesting articles written by members of the Odia community of the UAE about Odisha and its personalities.

The evening ended with a sumptuous dinner which showcased some delectable Odia foods.

OSUAE is a social and cultural organization which represents all the Odias living in the United Arab Emirates. It is OSUAE’s constant endeavour to keep promoting Odia culture and traditions, help fellow Odias in distress, indulge in humanitarian and charitable work and keep the flag of our culture and traditions flying high in this foreign land.  OSUAE organizes several festivals like Sri Jagannath Rath Yatra & Sri Ganesh Puja and various cultural events. ‘Utkal Divas’ celebration is the biggest event and the entire community joins in celebrating it.

Local talent (both adults and kids) are involved in various functions and OSUAE is proud to provide a platform for all of them to showcase their talents and abilities. Competitions for kids, picnics etc. are also organised and these increase the level of bonding that the community has. In addition to this, OSUAE also regularly organises Blood Donation camps and Medical check-up camps as a part of its social outreach initiatives. Through its activities, OSUAE tries to keep all the Odias together, promote Odia culture & traditions and keep them connected to their motherland.