Bhubaneswar: The Health and Family Welfare Department of Odisha has written to its counterpart in Bihar seeking cooperation for investigation into the spurious anti-hypertension drugs trade. 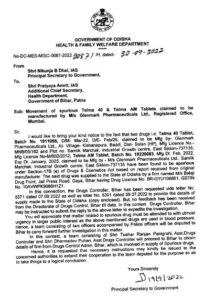 Dhal has urged Amrit to extend cooperation to a four-member special team of Odisha which has been deputed to Bihar to probe the spurious drugs case.

Earlier, there were reports that medicine wholesalers VR Drug Agencies and Puja Enterprises of Cuttack had procured the fake drugs for treatment of high blood pressure from Gaya in Bihar and Bangalore in Karnataka.

Notably, the Drug Control Administration of Odisha had raided several drugstores in Cuttack, Bhubaneswar and other places amid reports of sale of spurious drugs for treatment high blood pressure.

As per the allegations, counterfeit drugs in the brand names of popular anti-hypertension drugs—Telma-40 and Telma-AM—had been sent to around 1,000 drugstores in Cuttack, Bhubaneswar, Balasore and several other places in the state.

Subsequently, the Directorate of Drugs Control Odisha had directed immediate recall of the two particular drugs from the market.

Pharmaceutical major Glenmark has clarified that it had not manufactured the anti-hypertension drugs—Telma-40 and Telma-AM—seized from several drugstores in Odisha.