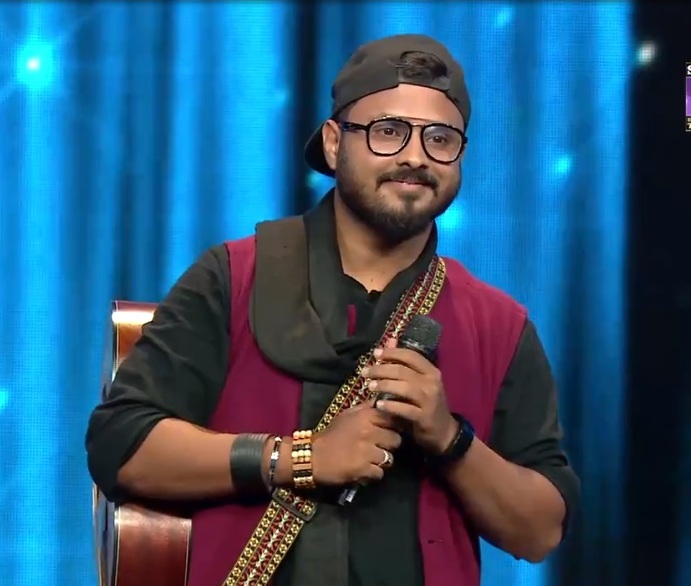 Bhubaneswar/Mumbai: Local lad Biswajit Mahapatra has secured a place for himself in the Top 14 of the tenth edition of popular singing reality show, India Idol.

Crooning to the song ‘Te Amo’ from the movie Dum Maaro Dum in the Theatre Round, Biswajit sealed the deal with his falsetto singing that hit the judges’ sweet spot. Singer-composer and judge Anu Malik applauded his effort and said, “The way you started the song was brilliant. Your hard work is commendable.”

Speaking exclusively to Odisha Sun Times, Biswajit said, “The timber of my voice was also appreciated by the judges. I tried to add my own touch to a very romantic number and that took hours of practice.”

This playback singer from Bhawanipatna also got an opportunity to visit the recording studio of music composer-singer and another judge of the show, Vishal Dadlani. Biswajit not only got a tour of the studio but also met Vishal’s music partner and singer-songwriter Shekhar Ravjiani.

“I had always dream of visiting such studios and I cannot believe that I visited Vishal-Shekhar’s workplace where legendary songs such as ‘Dil Diyan Gallan’ have been recorded. Vishal Sir is a very friendly person. He said that every singer needs to be a music composer. I shall treasure his encouraging words for the rest of my life,” said an elated Biswajit.

He will now compete with 13 contestants in the gala round of Indian Idol, aired on Sony Television evert Sat-Sun at 8 pm.

This is the second time the Utkal University alumnus will be seen on Indian Idol, after reaching the Top 40 in its previous season in 2016. He sang the popular Odia song “Puchuki Gaali” that amazed Bollywood singer Sonu Nigam and Anu Malik to such an extent that they joined him in a chorus and even danced. He was also the runner-up of a noted singing reality show on a regional television channel in 2012.

So far this 26-year-old has lent his voice in about 12 Ollywood film and music solos. He is trained in Hindustani classical vocal music by his mother, Gurus Santosh Kumar Jha and Chittaranjan Pani. He is pursuing western music under the tutelage of Sharmi Chakraborty from Kolkata.