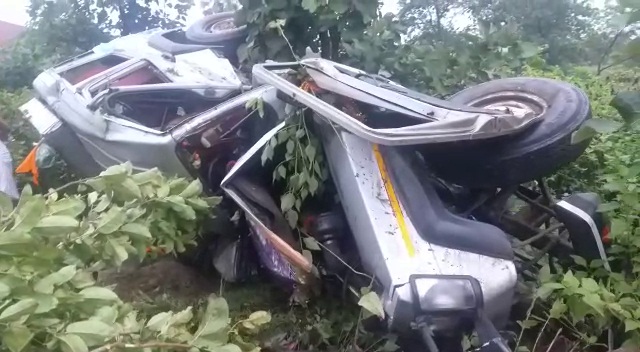 Baripada: Two Bol Bam devotees were killed and 10 others were critical after an SUV carrying them was hit by a speeding truck near Duarasuni ghat under Bangiriposi police limits in Odisha’s Mayurbhanj district late on Friday night.

The deceased persons were identified as Ranjit Ram and Sibu Sahoo, the residents of Handa village in Bangiriposi area.

The injured persons were admitted to the Pandit Raghunath Murmu Medical College and Hospital for treatment.

According to reports, a group of Bol Bam devotees were travelling to Gupteswar on an SUV (Bolero) to pour divine water on Lord Shiva during the holy month of Shrabana. Near Duarasuni ghat, a speeding truck collided head on with the SUV killing two devotees on the spot.

The truck driver also sustained critical injuries in the incident.

The locals with help of police and fire services personnel rescued the injured persons trapped inside the vehicle and rushed them to the hospital for treatment.