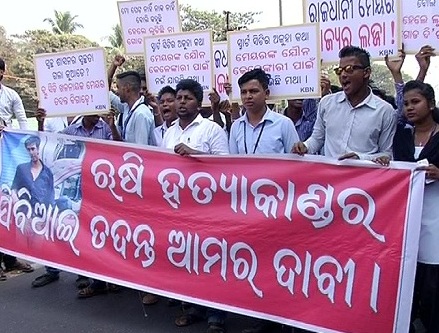 While students of Deba Ray College in Nayapalli area holding placards shouted slogans and staged a demonstration in front of the CBI office here.

The agitating students alleged of tardy progress in police investigations into the mysterious death case.

They demanded CBI probe and resignation of Bhubaneswar Mayor Ananta Narayan Jena. The agitators warned that students of different colleges in the city would hold similar protest demonstrations in the coming days.

Notably, the Twin City Commissionerate police are investigating the mysterious death of Rishi and its link with the viral sex video purportedly of the Mayor.

The police have sent Rishi’s mobile phone to Kolkata for forensic examination to ascertain the genuineness of the sex video and his purported conversation with the Mayor.