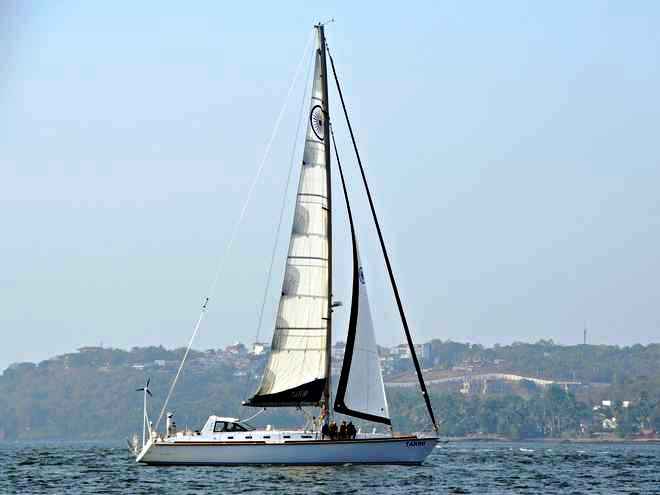 Notably, the nomenclature of the sailboat has been derived from a famous temple in Odisha’s Ganjam district – Tara Tarini.

The word Tarini means boat and is also a Sanskrit word for saviour.

Tara-Tarini is the patron deity for sailors and merchants and is worshipped for safety and success at sea.

Tara-Tarini of Odisha is known to have historical linkages with the river Goddess Mhadei — the exclusive boat deity of Goa’s Mhadei river. Both the deities have sculptural similarities.

The first Indian all women crew is scheduled for circumnavigation of the globe from August this year.

“The all women crew is slated to commence in August 2017. The team has logged over 10,000 Nautical Miles on INSV Mhadei, including a voyage from India to Mauritius and back and Goa to Cape Town braving through rough monsoon seas and heavy wind,” Admiral Sunil Lanba announced.

The keel of the vessel was laid on March 27 last year at the Aquarius Shipyard. The construction was diligently overseen by the Warship Overseeing Team, Goa and the vessel is being delivered before the scheduled date of delivery by the boat builder. Extensive trials of the newly built INSV Tarini were successfully completed on January 30 this year.  The boat is skippered by Lieutenant Commander Vartika Joshi and crew members include Lieutenant Commander Pratibha Jamwal, Lieutenant Aishwarya Boddapati, Lieutenant Patarapalli Swathi, Lieutenant Sh Vijaya Devi and Lieutenant Payal Gupta.

Indian Navy is operating four sailing vessels capable of open ocean deployments, that is, Tarangini, Sudarshini, Mhadei and Tarini, which have been built in shipyards at Goa. Indian Navy is attempting to revitalise open ocean sailing and will also be inducting four 40 feet, state of the art open ocean racing sail boats.

Security beefed up for 4th phase of panchayat polls in Odisha