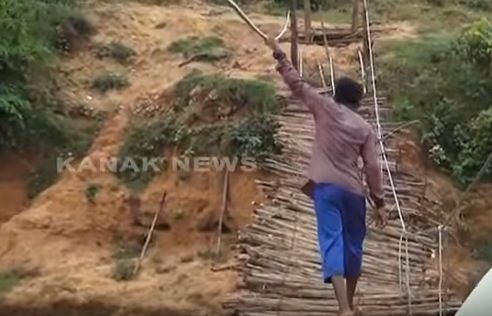 Rayagada: The locals in two remote villages of tribal district Rayagada have set example for others by constructing a hanging wooden bridge over Nagavali River for communication.

After the district administration turned a blind eye to their woes despite repeated requests for a bridge to remain connected to Kalyansinghpur block, the villagers of Tala and Upara Sajja decided to construct a bridge over the river.

Using their skills and with help of electric wires and woods, the villagers built a hanging bridge that has a length of 40-50 ft. The height of the hanging bridge is 12 feet to protect their construction from swelling of river waters during monsoon.

“We have been suffering since decades especially during monsoon season to be connected with other villages and panchayat office. However, the government remained aloof to the situation. Despite our repeated requests, the district administration did not pay attention. Later, we decided to construct a bridge on our own efforts,” said a villager.

“After completion of the bridge, our children can go to their schools during rainy season, the elderly people can visit the panchayat office to get pension and the pregnant women can now be taken to the hospitals,” he added.

According to reports, the two villages remain cut-off from the rest of the block headquarters during the rainy season with no facilities for communication. Taking the matter in their own hands, the villagers collected money to build the bridge.

“The construction work started a few days back and the bridge is nearing completion. Around 300 people of two villages will be benefited from the bridge,” another villager said.

Reports said that the district administration had given assurance to construct a Biju Setu a bridge on the river was washed away in 2017 flash floods. However, no initiative was taken later ignoring the villagers’ demand for the bridge.

Youth arrested for misbehaving with schoolgirl in Odisha

Odisha: Man meets with accident as portion of bridge caves…