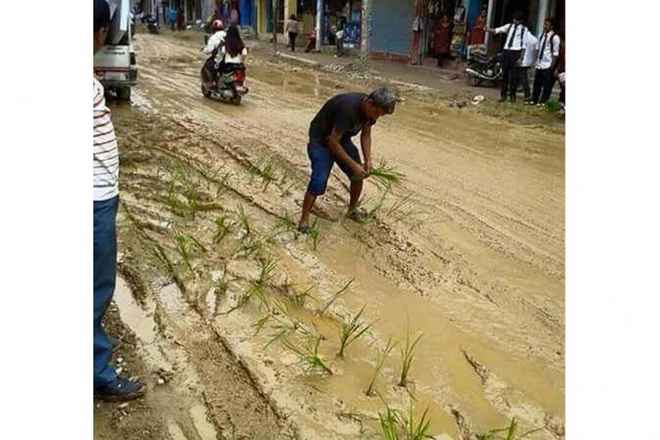 Residents of several villages in Sunabeda panchayat in Odisha’s Nabarangpur district have resorted to a unique protest by planting paddy saplings on a stretch of muddy road.

According to reports, the villagers under Umerkote Block in Sunabeda panchayat have been demanding for repair of a road connecting Jharigaon-Umerkote, but in vain. All their requests have fallen on deaf years owing which they planted paddy saplings on the road which has virtually turned a death trap.

Thousands of people from Bijapur, Majhiguda and Chalanguda villages traverse this stretch of around one kilometer to reach their destinations. As the road is not in a motorable condition, people take alternate route which is six kilometers extra than the usual path.

“We have been demanding for repair of the road but no one is paying any heed to our requests. During monsoon, the road becomes a death trap and people meet accidents quite often. We have planted paddy saplings to draw attention of the district administration,” a villager said.

The sludge has not only made life for motorists difficult but also for people walking through it, another villager expressed.