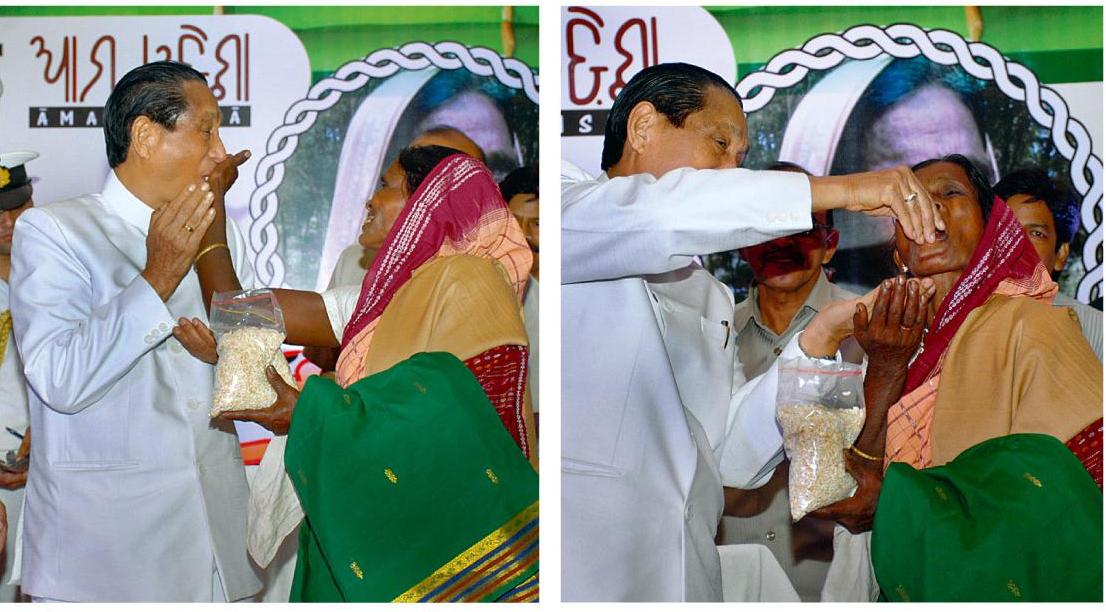 The hardened hands that held the plough, fed muri to Odisha Governor Dr. Senayangba Chubatoshi Jamir in front of a rapt audience in a glittery function at a posh hotel in the Odisha capital. The function had many eminent guests including senior Congress and leader Niranjan Patnaik, Editor of Sambad Soumya Ranjan Patnaik, social activist Padma Shri Tulasi Munda, Joint Director of Eastern Media Limited Monica Nayyar Patnaik on stage. Sixty-year-old Shantilata Raoul of village Suga of Balasore district in Odisha was felicitated by Sambad and Aama Odisha yesterday.

Married at a tender age of seven and widowed at 25 this woman showcased the combination of grit and determination of raw courage in the face of adversity. She became the mother to a son and a daughter and helped her husband with his farming but fate had something else in store for her. He succumbed to jaundice and Shantilata was left all alone to fend for her two kids and her mother-in-law.

In the black grief of widowhood she decided to continue with farming which
was unheard of as it was a man’s work! Heedless to the gossipmongers, she single-handedly plunged in and elked out a living for her family. She got her son married
and thought that she could rest, but again fate struck her a blow. Her son left
for Kolkata and settled there with his second wife while Shantilata had to take
care of an emotionally shattered daughter-in-law and a grand daughter.
In the earlier days, Shantilata ploughed the fields with her own gnarled hands but
today she rents a power tiller to do so. From tilling to harvesting, she is present on the field like a constant guardia taking care of each tiny little detail. When not in the field she is making her rounds selling home-made muri (puffed rice) in the nearby villages.
When asked about the farmer deaths in Odisha, she replied, “I will never give up being a farmer and accept defeat. You have to take the bull by its horns then only you will achieve success.”

Her grand daughter Sangita who studies in the seventh standard is a big granny’s fan. “I want to become like my grandma. I have never felt my father’s absence and she always gives me whatever I need,” she said.
Shantilata‘s daughter-in-law lives a life swinging between depression and
normalcy. “My mother-in-law is the man of the house and takes care of us. I feel
safe because of her and try to help her whenever and however I can,”she said
teary-eyed.

Shantilata is not a creeper but a full-grown oak tree giving food and shelter to her
family. Age does not scare her and her energy level can challenge any youngster. Picking up a heavy sack of fertiliser and balancing it on her head, her dreams are filled with verdant green paddy fields turning golden in the summer sun.

An extraordinary Odia woman who is full of guts and is an inspiration to many
others. We salute her!
balasoreCongresssoumya ranjan patnaik
Share FacebookTwitterGoogle+WhatsAppTelegramEmail