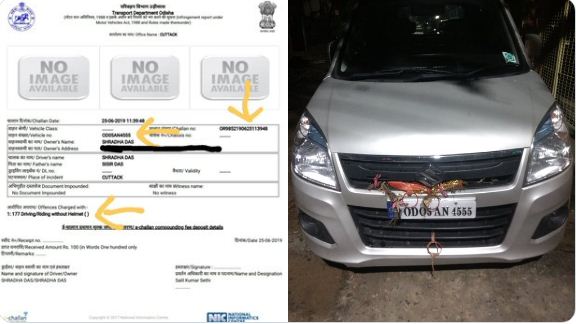 The matter came to fore after Das, a student of National Law University (NLU) Cuttack, brought the matter to the notice of Cuttack RTO and the state Road Transport and Commerce Department through a Tweet.

As per the allegation, on June 25, Das received a computer-generated e-Challan as against a fine of Rs 100 on charges of driving without helmet. Shockingly, the vehicle bearing number-OD05AN4555 was found to be her car. Moreover, the woman alleged that neither she nor anyone from her family was driving the car on the date mentioned in e-Challan.

“This is a false case. Moreover, I got to know that such computer-generated e-Challans have been sent to a lot of people with no fault of theirs. This is a pure case of mismanagement which will lead to defrauding of people,” Das said.

Odisha govt spent over Rs 86 crore for publicity of schemes

Odisha man heckled by RTO for inquiring about…