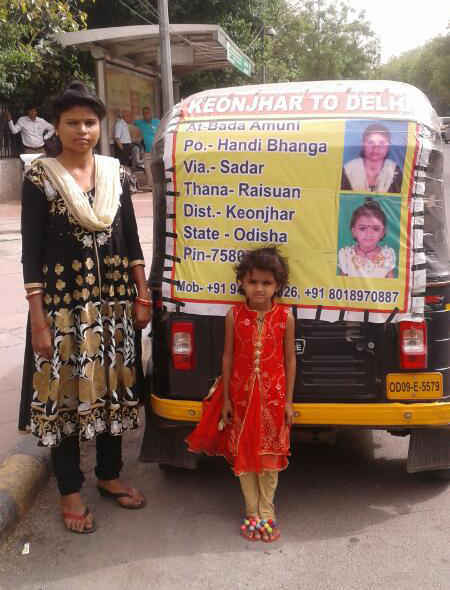 A woman auto rickshaw driver went to Delhi from Keonjhar district in Odisha in her auto to lodge a complaint against her husband with National Commission for Women (NCW).

Radha Maa alias Santoshi Deo reached Delhi yesterday via Jamshedpur, Ranchi, Agra and Mathura. She started journey from Keonjhar along with her daughter on Sunday.

About her trip, she said that she halted at various petrol pumps and reached Delhi on Sunday.

According to reports, Radha Maa of Badaamuni village in Handibhanga panchayat under Sadar block in Keonjhar had married to Rohit Dashsharma, a resident of Haryana. Following delivery of a baby girl from the couple, the husband started torturing Santoshi.

Later, Santoshi started staying with her parents in Keonjhar and helped her father in running a Tiffin centre. With her daughter grew up, Santoshi did not want to remain burden on her parents and decided to buy an auto on loan to build future of her daughter on her own labour.

She came to fore when software major Mindtree co-founder Subroto Bagchi, who is also appointed as Odisha Skill Development Authority Chairman, and Keonjhar District collector N Tirumala Naik visited entire Keonjhar town in her auto and provided her financial assistance along with making arrangement for her fooding and accommodation in the district.