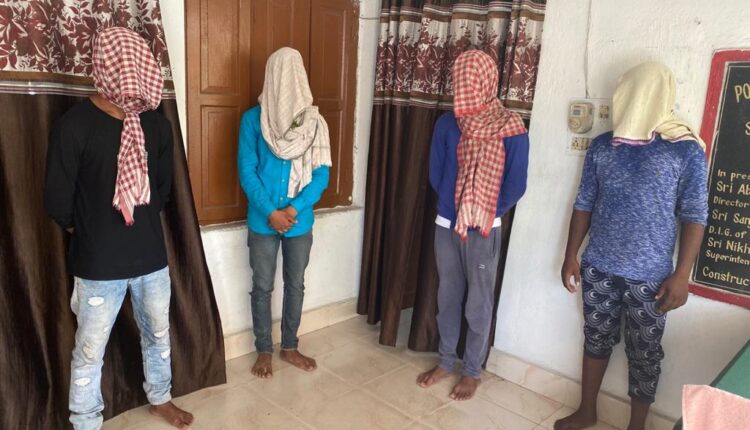 Sambalpur: Sambalpur police arrested 4 persons on charges of abducting a youth and demanding ransom for his release.

The district police cracked the kidnapping case with rescue of the victim and apprehending all accused persons in less than 12 hours of crime reporting.

According to report, a young man namely Sanjay Oram was kidnapped by two miscreants on a motorcycle (bearing the registration number OD-15 A 5491) from Pandiapali village while he was playing PUBG mobile game at around 8.00 pm on July 17 near a canal road. The culprits called up the victim’s sister and demanded ransom of Rs 25,000 for his release. They threatened for dire consequences if anyone in her family tries to contact the police.

Next morning, the abductee’s sister Sunita Oram (24) of Pandiapali village rushed to the Sasan Police Station and lodged a complaint alleging kidnapping of her younger brother.

All the accused persons were booked under sections 364 A/394/34 of IPC and forwarded to a local court yesterday, Sambalpur Police said in a release on Saturday.

The police also seized a motorcycle used for abduction and 5 mobile phones of reputed brands from possession of the accused persons.

Eyes can reveal about your traumatic experiences: Study