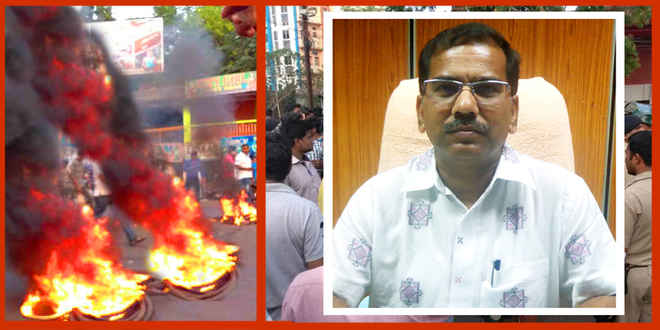 In the backdrop of reports of fresh violence in Odisha’s communally sensitive Bhadrak town despite clamping of prohibitory orders under section 144 CrPC, the district administration this evening imposed curfew to curb fresh outbreak of violence and bring law and order situation under control.

This was announced by Bhadrak Superintendent of Police Dilip Das this evening.

Meanwhile, the state government has appointed Gyana Ranjan Das as the new District Collector of Bhadrak. Das, who was Commissioner Cuttack Municipal Corporation (CMC) has been ordered to move to Bhadrak immediately and take charge today itself.

Fresh violence erupted in the district headquarters town following failure of talks at the peace committee meeting held this afternoon.

Locals blocked roads near Nua Bazaar Medical Chhak and other places while scuffles between the police and locals have been reported at several places, reports said.

Irate mobs have ransacked and torched shops in some areas of the district headquarters town, reports added.

Reportedly, mobs have even attacked and damaged police vehicles.

About 15 platoons of policemen have been deployed in the town to maintain law and order.

Notably, the violence had erupted in Bhadrak town yesterday following objectionable remarks on Lord Ram and Goddess Sita on social media allegedly by some members of the minority community.

The Bajrang Dal and Vishwa Hindu Parishad (VHP) activists had blocked the main road by burning tyres protesting against the remarks.

They had also gheraoed Bhadrak Town police station demanding arrest of the persons involved in posting of such remarks on social media.

The Bhagat Sena Ram Navami Samiti has lodged a complaint with police demanding arrest of those involved in the posting of offensive remarks.