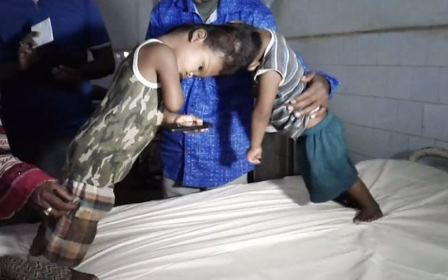 Bhubaneswar: In a major success for surgeons at AIIMS, New Delhi today, Odisha’s craniopagus twins — joined at the head – separated after a successful marathon surgery that lasted around 11 hours at the AIIMS in Delhi, Odisha Health Minister Pratap Jena said.

“Their health is stable, but they will be kept under observation for 72 hours. Plastic surgeons are on their job after they were separated surgically,” Jena said in here, adding that the surgery began at 9 a.m. and lasted around 11 hours.

A team of about 30 specialists from the institutes neurosurgery, neuro-anaesthesia and plastic surgery departments are performed the operation.

The second phase surgery was done before scheduled time as Jaga’s health deteoriated.

The Minister said the plastic surgery procudure is expected to continue till 10 a.m. on Thursday.

A senior doctor from the All India Institute of Medical Sciences (AIIMS), who is part of the medical team treating the twins, earlier told IANS: “The twins were taken to the operation theatre at 6 a.m. today. The surgery began at 9 a.m. and is expected to last for over 22 hours.”

Chief Minister Naveen Patnaik congratulated the team of doctors for successful operation of the conjoined twins- Jaga-Kalia and offered prayers to Lord Jagannath for speedy recovery of twins.

The conjoined twins were taken to AIIMS on July 14 from Milipada village in Kandhamal district of Odisha.

The first phase of the surgery was done on August 28, which included experts from Japan as well.

As part of the first phase, a new bypass technique was used for the first time on the twins.

Ahead of the surgery, the twins had to undergo numerous tests.

While conjoined twins are known to occur in about every 2,00,000 births, craniopagus twins are rarer, accounting for about only two per cent.

The Odisha government has sanctioned Rs 1 crore for the surgery at AIIMS.

Earlier, the twins had undergone medical check up at at SCB Medical College and Hospital in Cuttack.

A.K. Mahapatra, chief of neurosciences centre, earlier said the twins suffer from a condition that afflicts one in 30 lakh children, of which 50 per cent die either at birth or within 24 hours.

Surgery is feasible only on 25 per cent of the survivors while the rest continue to live with the condition.

Bhuyan Kanhar, father of the twins said, ” We got the news about separation through news channels. Now, I wish for their good health and speedy recovery with the blessings of Lord Jagannath.”

The 28-month-old twins hailing from a poor family in Milipada village of Phiringia block in the tribal-dominated Kandhamal district were taken to the AIIMS on July 13 and a team of 40 doctors had conducted a 20-hour long first surgery on them.

Odisha government had sanctioned Rs 1 crore from the Chief Minister’s Relief Fund (CMRF) for the treatment of the twins. (With IANS Inputs)

Private buses to go on strike in Odisha from Nov 1