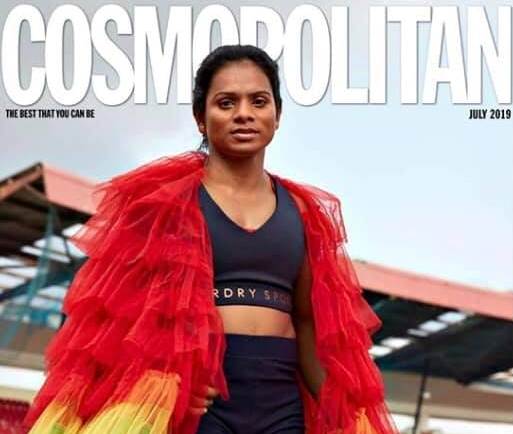 The ace sprinter is seen on the running track sporting a multicolored ruffled layered cape draped on her sports wear on the cover page of this month’s issue of the magazine.

She has spoken to the international magazine about her journey as a sportsperson and her coming-out story.

Cosmopolitan India has tagged the winner of two silver medals at the 2018 Asian Games, as ‘India’s Shining Star and First Openly-Gay Athlete’. Dutee has been making headlines for the last few months after becoming the first Indian sportsperson to reveal that she is in a same-sex relationship with her ‘soulmate’.

Furthermore, Dutee is the inspiration for other female athletes in track and field events. She went through severe mental trauma after she was dropped from 2014 Commonwealth Games in India under the International Association of Athletics Federations (IAAF) rules on hyperandrogenism.

However, she had moved the Court of Arbitration for Sport in Lausanne against her ban notice. Later, the IAAF withdrew the rules allowing her to return to 100m and 200m events.