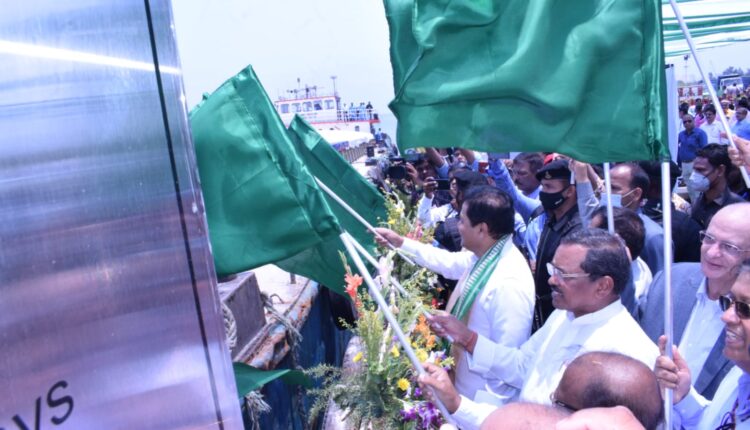 Sonowal, who was on a two-day visit to port town Paradip, inaugurated the IFFCO riverine jetty and flagged-off the cargo barge at the port in Odisha.

“As a first, we mark the linking of Mahanadi river to the Bay of Bengal, taking another step in our endeavour to join coastal and inland waterways,” he said in a tweet.

With the merger of inland waterways of Mahanadi with coastal water of the Bay of Bengal via Paradip port, a huge potential for development has been created,” said Sonowal.

Under Maritime vision 2030, the Paradip Port Authority (PPA) will become a mega port and for this, employees as well as stakeholders including exporters and importers will have to play a crucial role, he said.

Paradip is going to become one of Asia’s prominent industrial hubs as the Central government decided to execute large infrastructure projects of around Rs 10,000 crore, the minister said.

Indian Farmers Fertilizer Cooperative Ltd (IFFCO) has started the riverine jetty to explore the possibility of using waterways as a feasible mode of transport. The riverine jetty will open up a new dimension to the transport sector with the use of a multi-modal transport system.

The jetty was conceptualized by Orissa Stevedores Ltd (OSL). Currently, the jetty can accommodate vessels up to 2200 Deadweight tonnage (DWT).

It plans to develop and expand the facilities to accommodate larger vessels, which can directly cater to the neighbouring countries, officials said.

“OSL believes that Odisha’s vast river network offers ample opportunities for the trade and commerce in the state which would not only help ease congestion on roads but also reduce carbon footprint, making it one of the most eco-friendly ways of transportation,” said Mahimananda Mishra, CMD of OSL Group, on this occasion.