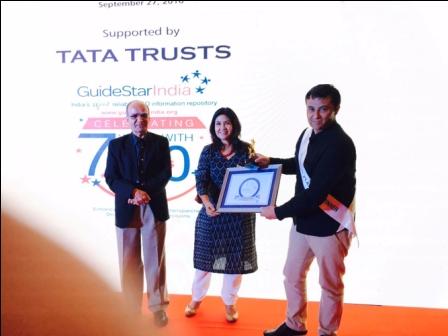 The award was given yesterday by GuideStar India at a special programme held in Mumbai, according to a press note issued by the organisation. Earlier, the institute had won Gold Star award for its financial transparency.

This recognition follows KISS’s inclusion recently in the Top 500 NGOs in the world — widely regarded as the ‘non-profit Ivy League’ – and among top 10 NGO’s in India in a ranking done by the Geneva-based organization NGO Advisor.

“As part of its commitment to maintain the highest level of transparency, KISS always publishes its accounts details, annual report and all other relevant information on its website, besides filing these documents regularly with authorities concerned. It is matter of pride that KISS has achieved Platinum Certification despite being an NGO of only 20 years,” read a press notification issued by the organisation after winning the award.

The award acquires added relevance as the Supreme Court of India recently noted that only 8 to 10 percent of about 31 lakh NGOs in India filed their accounts with the Registrar of Societies, detailing their receipt and expenditure.