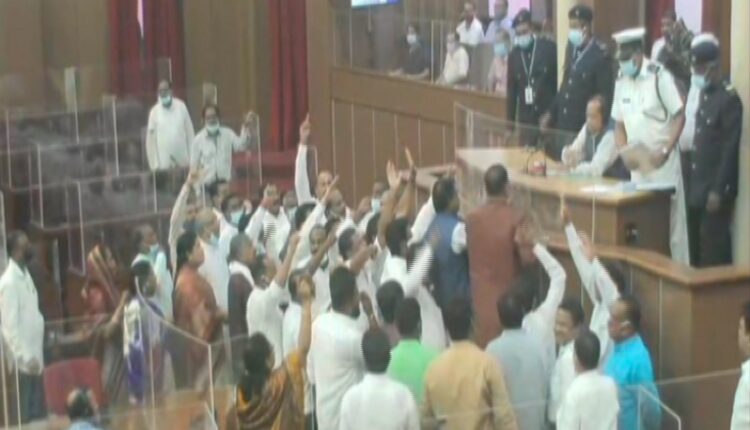 Bhubaneswar:  With no end in sight to the pandemonium in Odisha Assembly,  BJP today alleged that the ruling BJD is deliberately creating ruckus in the House playing the role of the Opposition.

The Speaker has not yet called for an all-party meeting to restore normalcy in the House. The ruling party is  intentionally creating ruckus to avoid discussion on various serious issues in the House.

Soon after the House assembled for the day and the Zero Hour commenced, MLAs of BJD,  BJP and Congress went on protesting and sloganeering against each other. While BJD members reiterated its demand for BJP MLA Subash Panigrahi’s apology for his suicide attempt inside the House, BJP and Congress MLAs raked up the issue of Mandi mismanagement. The legislators later went  to the Well of the House while continuing their protest.

Following the uproar, Speaker Surjya Narayan Patro adjourned the House thrice till 4 PM today and called for an all-party meeting to restore normalcy in the House.

“On the other hand,  a member tried to commit suicide consuming sanitizer placing his demand for farmers, on the other hand, members of Ruling Party are creating ruckus demanding his apology, for which, real problems of farmers and other state problems are being sidelined due to this deadlock instead of being discussed. As a Leader of the House, you are supposed to intervene in the matter taking confidence to all the parties for restoration of normalcy in the House,” the CLP leader said in the letter.

On this day in 2012, Tendulkar scored his 100th international ton