Bhubaneswar: Amid the marital dispute between actress Varsha Priyadarshini and her actor-turned-politician husband Anubhav Mohanty, the former today announced that she would soon pen her first book titled ‘ANTAHSWAR, Anek akuha katha’. 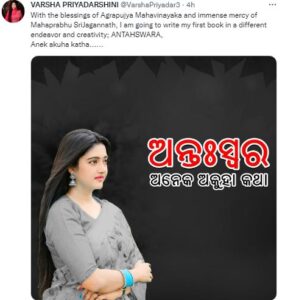 “With the blessings of Agrapujya Mahavinayaka and immense mercy of Mahaprabhu Sri Jagannath, I am going to write my first book in a different endeavour and creativity; ANTAHSWARA, Anek akuha katha…..,” the Odia actress said in twitter post today.

It is worth mentioning here that Varsha yesterday (Tuesday) informed the District Judge Court in Cuttack that she would vacate Anubhav’s parental house within a month.

Hearing a petition filed by Anubhav, the Sub-Divisional Judicial Magistrate (SDJM) court in Cuttack had directed Varsha on June 2 to vacate her husband’s parental house at Nandi Sahi in the Silver City within two months.

The SDJM court had directed Anubhav to pay a sum of Rs 30,000 to Varsha before 10th of every month for an alternative accommodation.

Challenging the SDJM court order, Varsha moved the Cuttack District Judge court, which had pronounced an interim stay on the lower court’s order.

Varsha Priyadarshini gets interim relief from Odisha HC over…