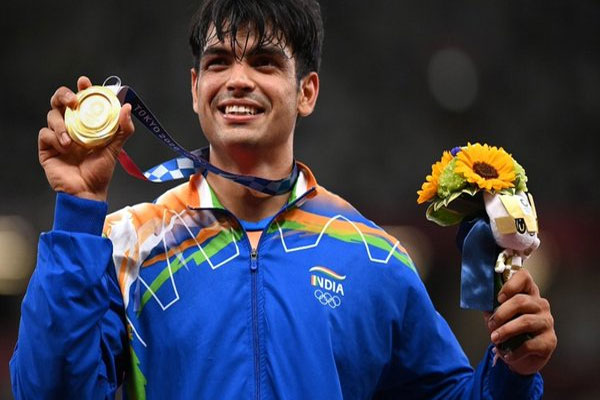 Tokyo: World Athletics (WA), the global governing body for the sport, has featured Indian gold medallist at the Tokyo Olympic Games, javelin thrower Neeraj Chopra, on its front page, saying that, “With a mark of 87.58m at the Games, the 23-year-old had launched himself to sporting superstardom as he became India’s first ever Olympic champion in athletics.”

Chopra hurled the javelin to a distance of 87.58 metres in a field that had the likes of Germany’s Johannes Vetter — the top javelin exponent in the world — to become the first track & field athlete from India to win gold at the quadrennial showpiece.

Tracing the 23-year-old’s journey from the IAAF World Under-20 Championships in 2016 — where he achieved a world U-20 record throw of 86.48 metres, till the Tokyo Olympics –, WA wrote, “The final throw was taken (in Tokyo) and only then could Neeraj Chopra breathe a sigh of relief. It was a moment so monumental that 7 August will now be celebrated as National Javelin Day in his home country.”

The Athletics Federation of India (AFI) has decided to celebrate August 7 each year as “National Javelin Throw Day” and all states and union territories will hold events to mark the occasion.

“But it was not the first time Chopra had made history for his nation. Five years earlier, the rising javelin star had broken the five-year-old world U20 record in Bydgoszcz (Poland) to win India’s first ever gold medal at the World U20 Championships. As the next generation gets ready to compete at the 2021 edition of the age group event in Nairobi, Kenya, from 17-22 August, Chopra hopes his performances have helped to inspire,” wrote WA in its article on Friday.

“Chopra’s javelin journey started in 2011 when the 13-year-old son of farmers joined a local sports group to be active. He never looked back and Chopra’s win at the 2016 World U20 Championships was a major milestone.

“Chopra, who was coached by Gary Calvert to his world U20 title and then teamed up with Klaus Bartonietz, went on to claim his Asian title in 2017 before Commonwealth and Asian Games gold in 2018. But then, while training for the 2019 World Athletics Championships, he was struck with injury which required surgery on his throwing arm. He returned in 2020 but then the world went into lockdown,” wrote WA.

“One year later, he announced his comeback with a national record-breaking throw of 88.07m in Patiala.”

Ayushmann Khurrana feels he has represented India correctly through films. Here’s how

Latest World Athletics Rankings are out; here’s where…