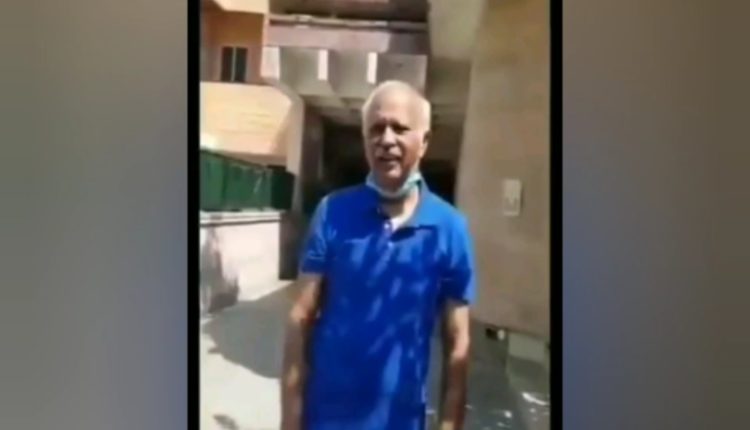 Haryana: While the COVID-19 lockdown has thrown life out of gear across the country, some on-duty police personnel have put on their ‘good samaritan’ hats to sprinkle the colours of joy in the lives of civilians.

A video from one Sandeep Ahlawat’s Twitter handle surfaced today in which a few cops were seen gathered in front of a stranger senior citizen’s residence to give him a birthday surprise amid the lockdown. Since the elderly man named Karan Puri, a retired Colonel, lives alone in his house in Panchkula area of Haryana, five on-duty cops today approached to his house to give him a surprise on his birthday.

The cops, putting up serious faces,  walked up to the main gate of Puri’s residence and called him near the gate when he was strolling in the premises. Responding to them, a little clueless Puri came up and told them his name and that he is a senior citizen and lone resident in the house, in case they wanted to put that on record.

Suddenly, the cops presented a cake and started singing birthday song for him. Puri was shell-shocked for a moment and then, he broke into tears. He immediately asked the cops, “Apko kisne bataya!” 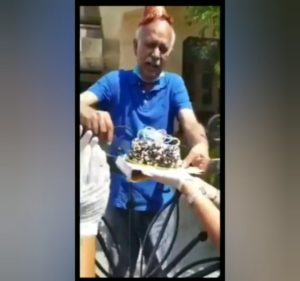 The cops asked him to walk forward and cut the cake. Listening to that, a teary-eyed Puri said that he had not celebrated his birthday for quite sometime as he stays alone in the house and his children were away. Saying that, he again broke down and asked the cops to give him a moment to sink in with what just happened.

Puri walked a few steps away from the cops to one corner of his compound and took out a handkerchief from his pocket and wiped his tears.

Meanwhile, the cops tried to cheer him up saying that they were like his kids too and that’s why they were there to celebrate his birthday. After a while, Puri came forward to cut the cake. The cops handed him a birthday cap along with a cake-knife, seeing which, the old man laughed out.

Later, Puri cut the cake and thanked the police personnel for the kind gesture.

“Thank you… You made my day… ” he said with a smiling face.

Panchkula Police surprised a Senior citizen living alone today Morning by wishing him a Happy Birthday. The Retd. Colonel broke down at this gesture !! pic.twitter.com/fDbPdHI1pQ

Another COVID-19 patient recovers in Odisha

Battle against COVID-19: Drones to spray disinfectant in North Zone of BMC