One dead as overloaded pickup van overturns in Odisha 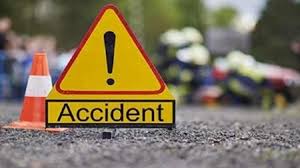 Bhanjanagar: A pickup van overloaded with brinjals overturned near Kalinga Ghati on Bhanjanagar-Phulbani national highway killing one person on the spot last night.

The incident took place at around at 1.30 AM, when driver of the pickup lost control over the vehicle leaving him critically injured . The deceased driver has been identified as Pratap Pradhan, a resident of Kabisuryanagar in Ganjam district.

Onlooker Santosh Das, driver of another pickup van, said the speeding vehicle overturned after Pratap suddenly pressed the break pedal. He rushed critically-injured Pratap to a nearby hospital in his van. Midway, an ambulance reached and took the injured to Bhanjanagar Sub-divisional Hospital.

However, Pratap was declared dead by the doctors at the hospital. After receiving information, police reached the spot and initiated an inquiry.